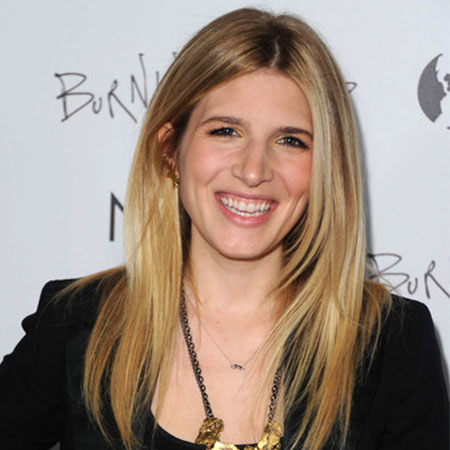 Kate Albrecht is an American actress and writer known for movies like The Princess Diaries 2: Royal Engagement, Entourage etc. The LA native is famous for her beauty as well as her skills as a writer and actress, however, among people, she is famous for being the wife of Joey Zehr. Her family is also popular as her father is the former chairman and CEO of HBO.

Kate Albrecht was born on June 4, 1983, in California, the USA under the star sign of Gemini. The people of this star sign tend to be social, talkative, and whimsical which are all reflected in Kate's personality.

She was born to father Chris Albrecht who is the former CEO and Chairman of HBO and mother Annie Albrecht.  Albrecht is an American by nationality and White by ethnicity. She chooses not to reveal information regarding her siblings.

She is a graduate of Loyola Marymount University with a degree in film production.

You May Also Like: American Actress Malina Weissman's Family Life-Get To Know Her Parents And Her Life With Them

After graduating from college, she became an actress and landed roles in Entourage and My Best Friend's Girl. She first entered show business by playing a minor role in Sex and the City. Then she played another role as a French Citizen.

After years of acting in the film industry, she started her Mr. Kate brand in 2010.  As an actress, she played many roles among which notably she played the role of Christy in Entourage.

As a writer she wrote the series Mr. Kate in 2010, her writing career only consists of one credit.

The video below is an interview of Kate on the red carpet at the Shorty awards which is given out to people involved in social media professionally.

Then she also appeared in the AT&T Hello Sunshine Filmmaker Lab video short. Similarly, she made an appearance in the TV series Home Made Simple and Home & Family.

She also runs a jewelry store based on designs from her show, her blog was also an extension of her jewelry store.

To add to her already successful career she is also a Youtuber whose channel is subscribed to by more than 3 million people as of January 2019.

The all-round star model is a well-known name in her field, due to her popularity, talents, and beauty she is worth around $270,000.

Her channel on YouTube generates around $150,000 a year from the ad revenues. Other than this her jewelry line can cost upwards of thousands, so she is steadily earning from many sources.

Albrecht is married to The Click Five drummer Joey Zehr, the pair tied the knot in 2013. As of November 2018, they are expecting a baby.

Zehr was passionate about music from an early age and studied music at the Berklee College of Music where he double majored as a producer and an engineer.