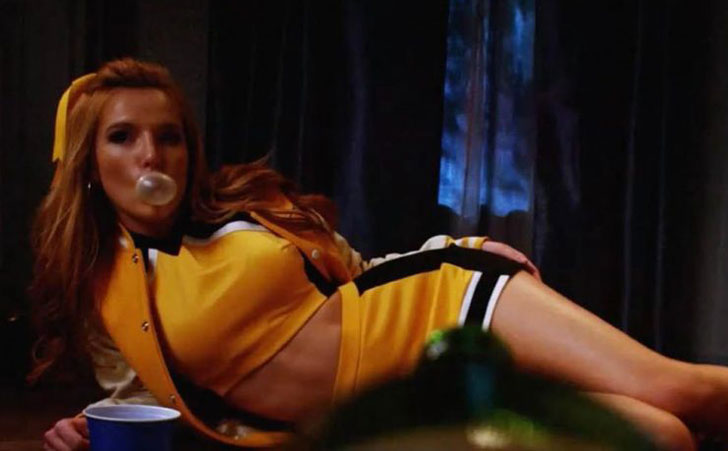 The official trailer of the Netflix comedy-horror, The Babysitter, released on October 3.  The 19-year-old Bella Thorne is playing a lead role as Sonya, a psychopathic high school cheerleader in the movie.

In the initial trailer, she is seen in a seductively skimpy cheerleader costume- flaunted her taut stomach. Not only that, but she has also shared a steamy smooch with her co-star Samara Weaving.

Read More: Actress Bella Thorne is engaged to Gregg Sulkin in 2016. Are they married? Find out, here?

Prior the trailer, Bella shared series of romantic snaps with YouTuber Tana Mongeau on her Instagram. They both have shared a passionate kiss on their Instagram after which the two are speculated to be in a relationship.

However, Thorne appeared making a statement as she stepped out in Los Angeles on Monday where she was seen in a pair of trainers with the slogan ‘I love boys’ printed around the edge.

Read More: Bella Throne Decided To Stay Back After Scott Disick Invited Her for Cannes?

Earlier, the YouTube star had tweeted: “I want to date @ Bella Thorne’ and after they shared the Instagram, Tana followed up her tweet which reads: ‘Dreams do come true kids.’

Read More: YouTuber Tana Mongeau Opens Up about her Break Up with Somer Hollingsworth-Reason, Are they Back together??

The McG-directed horror-comedy movie The Babysitter will be released by Netflix on October 13, 2017.