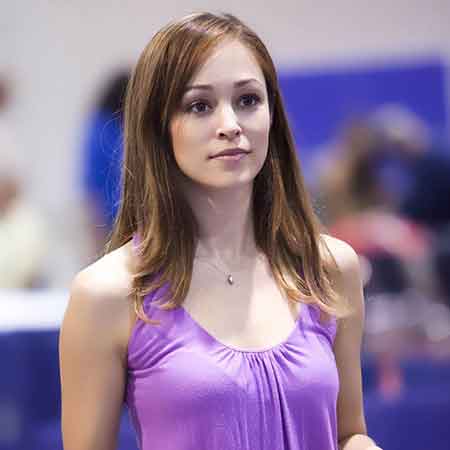 Autumn Reeser is a multi-talented actress who is known for her appearance in the drama series The O.C. For her career of over a decade, the actress worked on several movies, plays, and television series. Reeser notably starred in the drama like Hawaii Five-0, Valentine, and others. The prominent actress gained further acclaim for her work in the Hallmark movies like Season for Love. Aside from her decorative career, the actress is seen enjoying a joyous life with her children following the divorce with former husband, Jesse Warren.

Autumn Reeser was born on 21 September 1980 in La Jolla, California. Her parents are Tom Reeser and Kim Reeser. She grew up in her hometown with her sibling, a sister named Melissa Reeser. She holds an American nationality and belongs to the White American ethnic group.

Autumn was interested in acting from her young age and used to perform in local musical theatre productions. After completing her high school, she moved to Los Angeles, along with her family.

Reeser graduated from the University of California, Los Angeles, and won the Inter-Collegiate Mock Trial All-American Award in 1999.

Furthermore, the actress studied acting at the Beverly Hills Playhouse.

Autumn Reeser began acting from her young age; however, she started her professional acting career in 2001 from a minor role in the science fiction television series Star Trek: Voyager. Then after, she appeared in the guest role in the procedural drama CSI: Crime Scene Investigation. She then worked in the sitcom Grounded for Life (2001), Maybe It's Me (2002), and Complete Savages (2004).

After a series of remarkable TV appearances, the Grounded for Life star appeared on the big screen from the romantic comedy movie The Girl Next Door in 2004. In the film, she shared the screen with famous artists like Emile Hirsch, Elisha Cuthbert, Timothy Olyphant, James Remar, Olivia Wilde, and others.

Eventually, the actress worked in the 2005 hit movie Our Very Own. In the film, she portrayed the role of Merola Kendal.

In the same year 2005, Reeser landed a notable role of Taylor Townsend in the teen drama television series The O.C. from. She appeared in the TV series from 2005 to 2007. This is the very same series which helped Autumn Reeser to gain immense popularity.

Continuing her flourishing television career, Autumn portrayed the role of Lizzie Grant in another HBO's comedy-drama television series Entourage from 2009 to 2010. After that, the Palo Alto actress then played the character of Katie Andrews in the ABC's drama No Ordinary Family (2010-2011).

Besides her television series, the actress also worked in many films and TV shows, including Nature of the Beast (2007), Midnight Masquerade (2014), A Country Wedding (2015), Season for Love (2018), and many others. In 2018, Reeser played a role in Hallmark movie, Season for Love.

CAPTION: Autumn Reeser in The O.C SOURCE: The Avenue

Alongside her movies and television roles, the actress is also engaged in a theatre group, The Thrilling Adventure Hour. She was involved in the same theatre from the year 2006. With the theatre group, Autumn has performed shows in different places across the world, including New York, Chicago, Australia, New Zealand, and others.

How Much Is The Net Worth Of Autumn Reeser?

According to Celebrity Net Worth, the talented actress, Autumn Reeser, is estimated to have a net worth of $3 million as of 2019.

She collected her net worth from her successful diverse career of over a decade in movies, TV series, and plays. The actress has worked for many many successful films and TV shows, which is also a major source of income.

Besides that, she also started her self-titled YouTube channel with a few subscribers. According to a verified source Social Blade, she is reported to make $0.09 to $1 per month and has an estimated yearly earning of $1 to $18.

Likewise, she also earns from her lucrative agreements and endorsements deals. As per a source Influencer Marketing Hub, Autumn Reeser has an estimated earning of $372 to $620 per post as of 2019. She has around 92 thousand followers, with an engagement rate of 5.25%.

How Is Autumn Reeser's Lifestyle? Assets And House

She purchased the house for $1.3 million, sharing with her ex-husband Jesse Warren. The house featuring four bedrooms and three bedrooms was on the market for sale at the price of $1.7 million.

Surfing through her Instagram, she seems to be enjoying a lavish lifestyle. Reeser is also an avid animal lover and owns a Papillon dog, which she named Gatsby.

Autumn Reeser is single as of 2019. After her divorce from her husband, she is seen spending time with her children rather than dating someone.

Reeser was married to her longtime boyfriend, Jesse Warren. The couple exchanged their marital vows on 9 May 2009 in Ojai, California.

Well, things didn't work between the pair, and unfortunately, they parted away in 2014.

Trivia: Reeser's author friend Patrick Loubatiere wrote a book about her. The book was published with the title No Ordinary Girl, which is available in dual language, English, and French language.