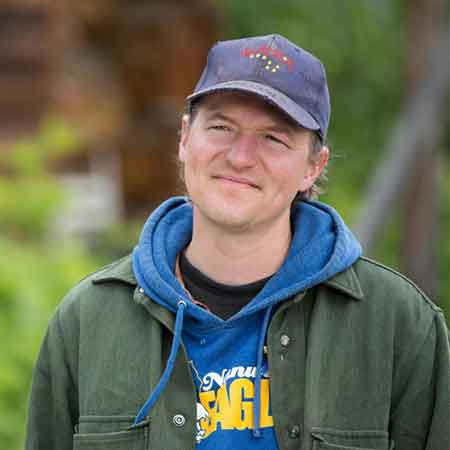 Reality TV star, Atz Lee Kilcher is best known for his appearance on Discovery reality series, Alaska: The Last Frontier. The show features the extended Kilcher family at their homestead 11 miles outside of Homer who chooses to subsist by farming, hunting and preparing for the long winters instead using modern heating.

Atz Lee was born was Atz Lee Kilcher on August 26, 1977, in Homer, Alaska, the US to  Atz Kilcher and Leandra Carroll. His birth sign is Virgo which defines his personality as a loyal, kind and hardworking who have strong opinions and they aren’t afraid to voice them. He has two siblings, a sister and a brother named Shane Kilcher.

Atz Lee has the great pa s sion for music and to pursue his musical career, he left the subsistence life on the homestead in the late 1990s but one day he realized where he truly belongs and returned to his roots on the homestead, built a cabin and hasn't left since. He provides supplies to his family by hunting and farming.

Atz Lee rose to fame after starring in the Discovery show, Alaska: The Last Frontier. He has acc u mulated a good sum of the amount from his career, he has an estimated net worth of $2 million. As per some online sources, he earns more than $200k per episode.

Atz Lee is a married man, he tied the knot to his longtime girlfriend, Christina Jane Kilcher in 2005 at an intimate ceremony. Jane served as fisherwoman before marrying Lee. The duo first met in the early 2000s and their shared love for music helped them to get closed.

Had a great time with my lovely wife jane on Adak island. No caribou but plenty of great memories and history lessons. Hoping to get  on her next quiz
What did y’all think of the season premier of #ATLF ? pic.twitter.com/kaMisNNzVH

The couple is proud parents of two children, a son, Etienne Kilcher, and Piper Kilcher. Lee and his wife are quite protective about their kids which might be the reason they rarely featured in the show.

He is active on microblogging site, Twitter where he has more than 28k+ followers as of October 2018.