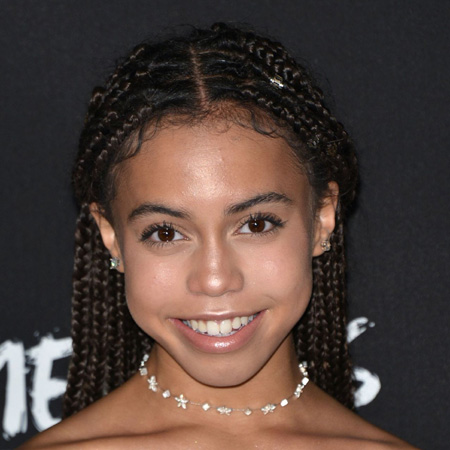 Asia Monet Ray is also known as ‘Triple Threat’ or ‘Wonder girl,' is a child dancer. She introduced herself to reality TV audiences as a competitor on Lifetime's Dance Moms as well as she is the star of the Lifetime series, Raising Asia.

The star of the Lifetime series, Raising Asia, Asia Monet Ray was born in Yorba Linda, California, USA, on August 10, 2005, to Shawn and Kristie Ray. Her mother is a dancer while her father is a famous professional bodybuilder.

Asia Monet Ray belongs to American nationality and ethnicity wise, Asia is of African American, Mexican, and Filipino heritage. She has a younger sister named, Bella Blu who is a famous gymnast. Asia is an all-rounder who has exhibited her talent as an athlete, singer, dancer, model, and actor from her early age of 12.

The child dancer, Ray took an interest in gymnastics and dancing from her early age of two. Realizing, she had a natural athleticism, Ray’s parents soon enrolled her for figure skating lesson and later dance lesson.

Asia Ray took an interested in dancing when she was just a toddler. Ray’s efforts paid off, and she made a history by becoming the youngest winner at the StarPower National Championships at the age of five.

After a year, Ray made her TV debut in the inaugural season of the dance reality show, ‘Lifetime's Abby's Ultimate Dance Competition,' where she ended-up as third runner-up. Despite being the youngest in the competition, she gained awful attention and praises from the judges and audiences.

In addition to her dancing, Asia Ray also made her debut in the music industry by releasing her first album ‘Asia Monet’ that included five original tracks. Moreover, she launched a ‘Christmas Time’ music video, which garnered more than 4.4 million views in its first year. She also covered a song of Justine Bieber, ‘I’ll Show You’ that garnered 75000 views in the first month.

She also appeared in an American reality TV series, Rising Asia. The series was premiered on Lifetime on July 29, 2014.

Asia Ray, 12, is, of course, an unmarried girl. She is pretty uptight in sharing her personal information to the outer world. Ray is also too young to get involved in a relationship and make boyfriends.

Ray is currently focused on making her professional career better rather than dating anyone and making an affair. Besides, one of her favorite songs is Listen by Beyonce who is her idol too. Also, she is quite famous on social media.

Asia Ray is a rising dancer, actress as well as singer. She has earned a praiseworthy amount of success and went on to win some prestigious awards in a short period. As of 2017, Asia has an estimated net worth of $100K.