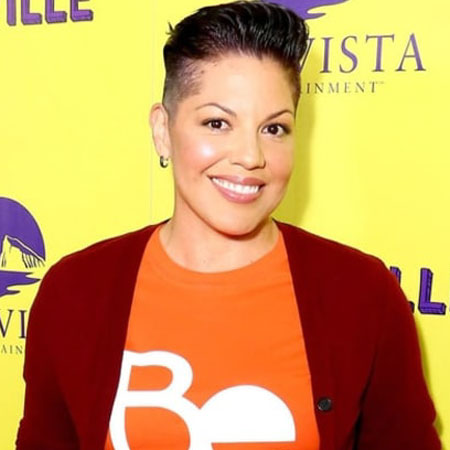 Sara Ramirez is a Mexican-American actress, singer, and songwriter. She is well known for her role as Dr. Callie Torres in Grey's Anatomy with her co-star Justin Chambers from 2006 to 2016. Sara won the Tony Award for Best Featured Actress in a Musical for her appearance in Spamalot as Lady of the Lake.

Sara Ramirez was born as a Sara Elena Ramirez on 1975, August 31 in Mazatlan, Sinaloa, Mexico. She is the daughter of actress/singer Luisa Vargas who was half Mexican and half Irish-American descent, and an oceanographer father was of Mexican ancestry.

Ramirez holds an American nationality and belongs to white ethnicity. Her parents divorced when she was eight years. After the divorce of her parents, Ramirez moved to Tierrasanta, in San Diego, California with her mother and settled there.

Ramirez joined the San Diego School of Creative and Performing Arts where she completed her course.

In 1997, Ramirez enrolled Juilliard School where she graduated with BFA in drama. She speaks English fluently and Spanish language.

Sara Ramirez first debuted on Broadway The Capeman in 1998 as Wahzinak. She was nominated for the Outer Critics Circle Award for her role in The Gershwins Fascinating Rhythm in 1999.

Sara even voiced the character of Lammy in UmJammer Lammy, a video game in 1998. Sara portrayed the role of the Lady of the Lake in the musical Spamalot based movie Monty Python and the Holy Grail.

Sara appeared in a recurring role as Dr. Calliope Torres in the TV series Grey's Anatomy and was a regular cast from the third season. She left the series after the 12th season. Sara currently voices the character of Queen Miranda in the series, Sofia the First.

Sara Ramirez is married to Ryan DeBolt on July 4, 2012. Her husband, Ryan is a banker. They were engaged in 2011 in Paris and married a year later in an intimate ceremony in New York.

The couple has no children yet. However, Sara revealed in an interview that she is well aware of it and planning for that soon.

The air has been married for more than 7 years and still shared a good bond. Also, there is no bad rumors regarding their relationship.

The Mexican-born actress played the bisexual character of Dr. Callie Torres for ten years on the TV series, Grey's Anatomy. Due to this reason, there was a huge rumor of her being bisexual. Later on, the former Grey's Anatomy actress confirmed that she is bisexual through an Instagram post. During her speech at the True Colors Fund 40 to None Summit in Los Angeles, Sara revealed herself to be a bisexual. She said:

Because of the intersections that exist in my own life: Woman, multi-racial woman, a woman of color, queer, bisexual, Mexican-Irish American, immigrant, and raised by families heavily rooted in Catholicism on both my Mexican & Irish sides," she said. "I am deeply invested in projects that allow our youth's voices to be heard, and that support our youth in owning their own complex narratives so that we can show up for them in the ways they need us to.

Sara was paid a good amount for her appearance in Grey's Anatomy. The salary of the actress was known to be around $200 thousand per episode. Her total net worth is estimated to be around $5 million.