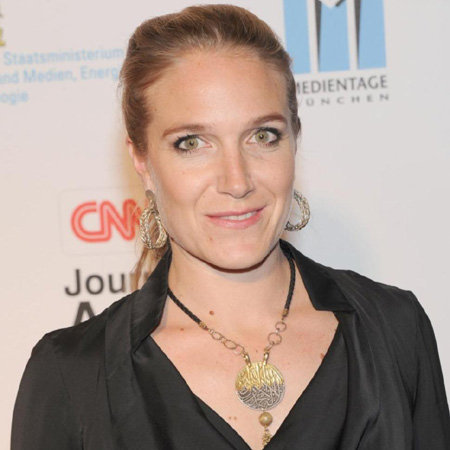 The Emmy Award-winning journalist Arwa Damon currently works for CNN. She is working for CNN since 2006. She is also the founder of INARA, a humanitarian organization that provides treatment to refugee children from Syria. She started her career before the beginning of the Iraq War in early 2003. She first worked as a correspondent Peter Arnett’s team into pre-war Iraq. She worked there for almost three years and moved to CNN in February 2006.

Arwa Damon was born on September 19, 1977, in Boston, Massachusetts, the United States to an American father, headmaster of the American Community School at Beirut, and a Syrian mother who was the granddaughter of the former prime minister of Syria.

Damon is an Arab-American, CNN Senior International Correspondent, based in Beirut. From 2003, she covered the Middle East as a freelance journalist, before joining CNN in 2006. As by her nationality, she is an American yet she spent her early childhood in Turkey and Morocco and later returned to the States after graduating from Robert College in Istanbul, Turkey in 1994.

Damon graduated with honors from Skidmore College, New York in 1999 with a double major in French and Biology and International Affairs as a minor.

Her childhood and education have made her fluent in Arabic, French, Turkish, and English. She studied major in French and biology and international affairs as a minor during her university. She follows Muslim as her religion because she was inspired by her mother who is a Syrian Muslim too.

Before beginning her career in journalism, Arwa Damon had prior working experience at a textile manufacturer and gained peoples' attraction through her dashing personality. She is passionate about her job. Arwa started her journalism career with Camera Planet.

Arwa is working hard to get herself to be a top-class TV broadcaster. Damon has covered many military and civic events during the invasion and occupation of Iraq. These include the United States Army’s Battle of Najaf against the Mehdi Army and the battle to retake Samarra in 2004.

Damon has also reported on the United States Marine Corps offensive against insurgents in Fallujah and Operation Steel Curtain in Husaybah; near the Syrian border. Civil events Damon has covered include the Iraqi elections of January 2005, the constitutional referendum vote in October 2005, and the Iraqi election of December 2005.

The 2010 Iraq elections and her initiative; Impact Your World gained much appreciation worldwide. It was then that she also got a chance to report about the distressed condition of the Iraqi women prisoners by being the first television reporter allowed inside the Kamiya women’s prison.

Damon has covered most events that have both political and historical importance. She currently serves as a senior international correspondent for CNN. There she also worked with many other well-known media personalities like Don Lemon, Jim Acosta, and Amara Walker.

The 36 years old, gorgeous, Arwa Damon has received many awards to date and the most recent being from Oxfam.

Arwa Damon's Salary And Net Worth

Being a TV broadcaster, Damon might have earned a good salary. She is working hard to get herself to be a top-class TV broadcaster. She is one of the by far most daring and adventurous female journalists of today’s times. She is paid a huge amount of salary for her daring acts too.

The journalist gave her 100 percent dedication towards her work and always has been able to satisfy her boss. Arwa being a TV broadcaster might have a good salary. Her net worth is known to be around $3 million. She is a senior international correspondent where her annual salary ranges from $86,663-$186,592.

Arwa Damon has not disclosed any information about her marriage, spouse, and divorce and to date, she has been able to maintain a low profile regarding it. The beauty queen Arwa is not married at all and hence looking for a husband whom she can complete her life after her wedding.

Damon is looking for someone special who will treat her like a princess. Currently, the gorgeous lady must be having an affair with her undisclosed boyfriend.

Recently in March 2017, an Iraqi family named their child after her as she was the source of inspiration to everyone.

Arwa Damon is a co-founder of IRARA (the International Network for Aid, Relief and Assistance), the humanitarian aid of the non-profit organization of 501(c)3. It renders medical services for children who are injured in war zones like Syria. The IRARA has provided medical treatment to more than 150 refugee children from Syria.