The 38th Governor of California, Arnold Schwarzenegger, is always in the limelight. Whether it is for his professional and personal life, The Terminator star is always making headlines.

Schwarzenegger reigned all over the media due to his separation from his wife of 25 years Maria Shriver back in 2011.

Soon after their separation, the actor/politician moved on and started dating Heather Milligan. How is Schwarzenegger's love life with his young girlfriend going on? Details Below!

According to a source, the couple first met in late 2012. They started dating since the fall of 2013 and since then they have been inseparable.

Schwarzenegger and Milligan have been dating for about four years now and are madly in love with each other. The lovebirds are quite open about their romance.

They appeared enjoying a wonderful date eating ice cream in Brentwood, California on October 2017. The pair also goes to several events and shopping dates together. Despite their crazy age gab, Arnold and his girlfriend Heather Milligan are sharing a loving relationship from the past many years. But the planning of their wedding is yet to confirm.

It has also been reported that Schwarzenegger and his sweetheart currently resides in Los Angeles, California.

Also Read, Is Blindspot Actor Sullivan Stapleton Dating? Denies Rumors Of Being In A Relationship With Co-star Jaimie Alexander

Schwarzenegger and his former wife, television journalist Maria Shriver had their first encounter at the Robert F. Kennedy Tennis Tournament in August 1977. At the time, they were introduced by a mutual friend, Tom Brokaw.

The couple exchanged their vows on April 26, 1986, in Hyannis, Massachusetts. The wedding ceremony was held at St. Francis Xavier Roman Catholic Church. The couple has four children together. 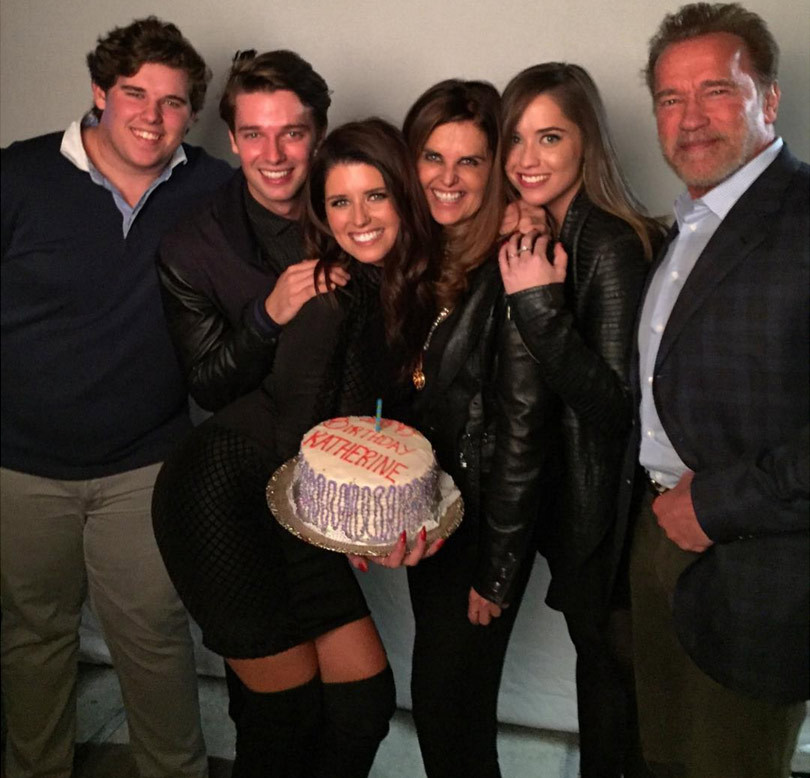 Arnold Schwarzenegger and Wife Maria Shriver with their children

Also read: How is the personal life of Arnold's ex-wife Maria Shriver going on after their divorce?

During their marriage, Schwarzenegger and Shriver lived in their 11,000-square-foot (1,000-meter square) area mansion in Brentwood. Together, the couple also attended St. Monica's Catholic Church. Their divorce is yet to be finalized. Arnold is not popular about his acting career but also his abusing behavior.

The pair were married for over 25 years until their separation in May 2011. Reportedly, Shriver moved out of their Brentwood mansion soon after the separation.

Why Did Arnold Schwarzenegger and Maria Shriver Separate?

The Terminator star and his former wife Shriver announced their separation in May 2011. The reason for the end of their 25 year-long married life was infidelity.

The actor/politician had fathered a child, Joseph, with their housekeeper Mildred Baena.

At the time, Shriver said that her husband's confession was "painful and heartbreaking." She explained:

As a mother, my concern is for the children. I ask for compassion, respect and privacy as my children and I try to rebuild our lives and heal. I will have no further comment.

Shriver filed a divorce on July 1, 2011, claiming the custody of their two children Patrick and Christopher. Their divorce hasn't been finalized yet and according to a source, the former pair hasn't been able to settle in the division of their property and assets.

You may be interested, Steve Guttenberg, "Three Men And A Baby" Actor Marries Longtime Girlfriend Emily Smith In An Intimate Wedding