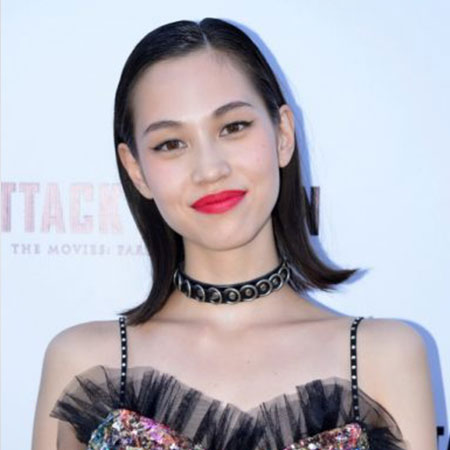 Modeling might just be a career for many of the aspiring talents, but when it comes to Kiko Mizuhara, it is pa s sion and perfection. Not only model, but Mizuhara is also an actress, singer, and a designer who does every work with elegance and perfection. Besides, she is also a famous face on social media too where she has over 5.2 million followers.

Kiko Mizuhara was born Audrie Kiko Daniel on October 15, 1990, in Dallas, Texas, the U.S. under the star sign Libra. She was born to mother Yae Toyama and father Todd Daniel. She has a younger sister Ashley Yuka Daniel who is four years younger to her. Her sister also works in the modeling industry under the stage name Yuka Mizuhara.

CAPTION: A headshot of Mizuhara. SOURCE: The Business of Fashion

Her father is a White American from Texas and her mother is Zainichi Korean from Nagasaki, Japan. She belongs to Mixed ethnicity and she holds both American and Japanese nationality.

Kiko Mizuhara was only 2 years old when she moved to Tokyo with her parents. After this, her family relocated to Kobe, Japan when she was 3 years old. As per her personal website, Mizuhara is fluent in English, Japanese and Korean languages.

Mizuhara’s professional career began in 2002 when she won a competition and she got a chance for the audition of the Seventeen as a reward. She aced the audition and was picked up by the magazine as Miss Seventeen. She became the exclusive model for the magazine for the next 3 years.

In 2008, she regularly modeled for the Tokyo Girls Collection. Similarly, she debuted in an international runway at The Paris Collections in Olympia Le Tan's Spring/Summer 2014 Show.

The video below is an interview of the Japanese model where she speaks in fluent English.

She also chased her acting dream and stepped in the industry working in the movie Norwegian Wood in 2010. Two years later, she again worked in another movie named Helter Skelter. After acting in some movies, she got her breakthrough role on the live-action adaptation of the anime Attack on Titan, Attack on Titan: End of the World in 2015.

Apart from all these diverse skills, Kiko Mizuhara is also a designer. As a designer, she started collaborating with the American clothing brand Opening Ceremony during Spring 2013.

Kiko Mizuhara’s Net Worth, Salary, And Major Source Of Income

Kiko Mizuhara's career is an illustrious collection of achievements with which she has managed to earn a ma s sive worth of around $500k. She is secretive about her earnings, however, the average earnings of a model range from $32,000 to 48,000 whereas the models can earn $100 per hour or $1,500 during their shooting day.

Kiko Mizuhara is currently single. She is not known to be involved in any kind of relationships. As far as her marital status is concerned, she is unmarried yet. She was, however, rumored to be dating former One Direction star Harry Styles. Though Kiku has denied the affair rumors, the pair was seen celebrating Styles' 25th birthday on February 1, 2019.

Kiko and his rumored boyfriend Styles also followed each other on Instagram.

In the past, the model was rumored to be dating the rapper G-Dragon, however, none of them opened about their alleged relationship. She was also rumored to be in a relationship with the Japanese model Nomura Shuhei. The rumor about their dating life sparked after the paparazzi captured them spending some romantic time after they worked together Numero Tokyo magazine.

The 28-year-old Japanese model is a popular face on social media like Instagram. She frequently takes to her social media to share her career-related photos, however, she hasn't used the platform to share her personal information and relationship status with her fans yet.