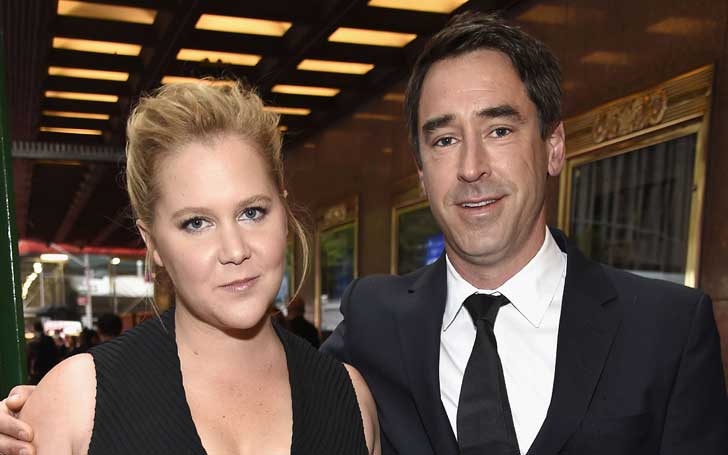 Baby on board! Actress and comedian Amy Schumer is expecting her first child with her husband Chris Fischer. The 37-year-old comedian took to her Instagram on Monday, 22nd October to announce her pregnancy.

Schumer hinted the big news with an edited photo of her and her husband onto an image of Prince Harry and Meghan Markle. Fans were directed to a profile of journalist Jessica Yellin.

About to announce some exciting news on @jessicayellin insta page. Please follow her for up to the minute #newsnotnoise she breaks down what’s really going on. She agreed to post a lil noise today for me! Follow her and VOTE!!

"I wanted to share some news from our community, maybe it's noise but it's a happy noise," Yellin wrote on her post. She further wrote,

So I'm not in the business of making voting recommendations, but these are the recommendations of Amy Schumer, one of the most consistent and earliest supporters of News Not Noise. Now read all the way to the bottom, you'll see there's some news down there Congratulations, Amy.

Schumer and Fischer sparked the pregnancy rumor shortly after their Malibu, California wedding. The lovebirds exchanged their vows on February 13, 2018, in front of around 80 attendees including actress Jennifer Aniston, Jennifer Lawrence, Chelsea Handler, and actors Jake Gyllenhaal, Larry David, and David Spade.

The lovebirds started dating in November 2017, however, they only took their relationship to the public shortly before their wedding in February. Then, the comedian took to her Instagram to confirm her relationship with Fischer where she shared a snap of her and her boyfriend kissing.

Happy Birthday @theellenshow thank you for having us!

They were speculated to be dating after they were spotted out and about together in NYC in November 2016, however, Schumer's representative declined all the speculations at that time.