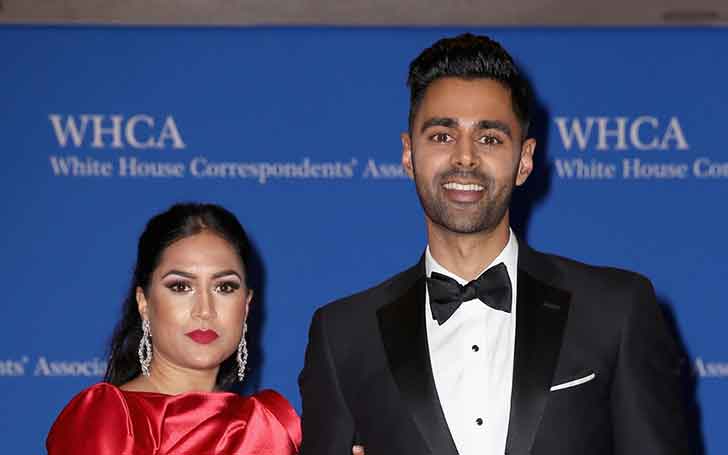 Hasan Minhaj is a 33-year-old American comedian, writer, political commentator, and actor who is prominence for his work on "The Daily Show" with Trevor Noah as its senior correspondent from 2014 to 2018. He started the new journey of his life in 2015 when he married his longtime girlfriend Beena Patel.

As of now, they have been married for almost four years, how is their conjugal life going on? How the couple first meet each other? We have all the details here.

How Did Hasan Minhaj Meet His Wife, Beena Patel?

Most People are not aware of the gorgeous wife of comedian Hasan Minhaj, Beena Patel. This is because Beena keeps an extremely low profile. You may be now wondering that how did Hasan Minhaj meet Beena Patel who keeps such low profile. Well, it turns out the couple goes way back even before Hasan's career began.

According to NewYork Times, Hasan met Beena in college at the University of California, Davis. When Hasan took his show, "Homecoming King," to his alma mater in 2016, he was asked by the campus magazine about the moment when he first saw Beena. He replied

"I met the love of my life there. It's wild. When you're living your life, you don't realize that history is happening in real time. So when I first saw her as a freshman, I was just living on the quiet floor in the Thoreau dorms. She was just a girl I had a crush on. I didn't know she'd be my wife."

Beena and I didn't move in together until we got married. We kept it very traditional — Mom, Dad, if you're reading this — so I had to evolve very quickly. I went from 'Scarface' photos to family photos. I'd never had throw pillows in my life, but I've now become accustomed to them. And I will say that scented candles are really nice.

Married Life Of The Beautiful Couple-Hasan Minhaj And Beena Patel

After dating for a few years, Hasan and Beena got married in January 2015. Since the couple is very low-key nothing much is revealed about their relationship, but if we surface their social media then we can witness the pure essence of their love.

As of now, the happy couple resides in NewYork city in the Hell's Kitchen neighborhood where they are trying to adjust being New Yorkers.

Welcome to the baby girl. God willing [iA] I’ll be with you every step of the way...

Speaking of their children the couple welcomed their first child, a baby girl on April 22, 2018. Furthermore, the name of his daughter has not been revealed yet. The comedian often shares beautiful snaps with his newly born baby girl and wife to his Instagram account where he has over 651 K followers, as of 2019.

It's been nearly a half decade that the couple sharing the same marriage journey with no conflict between the couple.

Also See, Stand Up Comedian Adam Hills Is Married To Ali Mcgregor-How Is The Couple's Relationship Going On?