American Actor Peter Scanavino is Married to Lisha Bai; Are They Happy Together? Any Divorce Rumors? 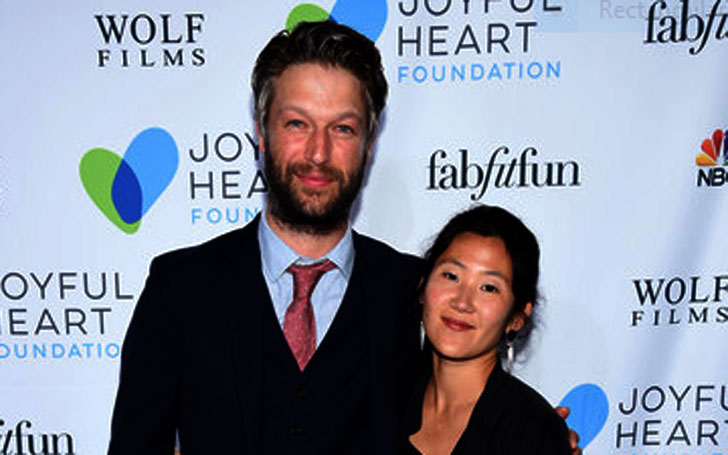 Peter Scanavino, renowned for his role in Law & Order: Special Victims Unit is married to Lisha Bai. The couple is blessed with two children; the youngest one arrived in January last year.

How is their married life going on? Is the couple happy together? Any divorce rumors? We have all the details of his romantic life here.

Peter Scanavino's Married Life With Lisha Bai; Are They Happy Together?

Peter Scanavino, 39, The Cold Lands actor married artist Lisha Bai a few years back after dating for a while. The couple has two children together.

The pair maintains a low-key personal life which has made it very difficult for us to know about their personal details. Since there are no divorce rumors, we can assume that they are happily married.

They have not revealed the name of their first child in public which merely proves the level of secrecy maintained by the couple.

Peter announced the happy news with a Twitter post of their newborn wrapped in a blanket with the caption:

"Welcome to the world, Leo."

Well, let's congratulate the family of four! Peter and his wife Lisha have been sharing a loving relationship for the past many years and still seem much comfortable with each other.

When we talk about the long-running NBC crime/drama Law & Order: SVU, the name Warren Leight strikes our mind. The show was renewed and premiered for the 19th season on 27 September 2017.

The show has changed the lives of the stars involved and particularly of Peter Scanavino.

During an interview with E! News, Scanavino said,

Me, personally, I can't say enough amazing things about [Leight] because he literally called me up and offered me this job when I was sitting on my couch wondering what I was going to do next. Now it's totally changed my life and I'll be forever grateful.

Scanavino first appeared in the series playing a guest role and later became a regular. In addition, he got the opportunity to star in Law & Order: Trial by Jury, Law & Order: Criminal Intent, and the mothership, Law & Order.

Mutual Friend actor couldn't believe the moment when he was called to play the role of Detective Dominick Carisi.

OK, I got a call to be a perp on the show in season 14 and that was great, just to get a job offer out of nowhere. I was like, ‘OK, done SVU, now I've done ‘em all. So that's it, it was great while it lasted, guess I can't do that for a while.' A year goes by and I get another call and he was like, ‘Do you want to come back on SVU?' and I was like, ‘Do you remember that I was on this show last year?' and he said, ‘Yeah, it's fine. Do you want to do three episodes?' I said, sure and that was fantastic, and then it turned into more and then this. Now it's a different world for me. It's amazing.

He's grabbed an enormous fan following with his amazing role as a detective. He also gets a positive compliment from the cops walking by.

What I have gotten a lot of is actual cops who would come up to me on the street, off-duty or guys that were on the job and they'd be like, ‘I was 20 years on the job and love you'.I feel like that's kind of a great compliment to get. I take a lot of pride to get that from some of the real deal.

We wish to see him in new projects in days to come!