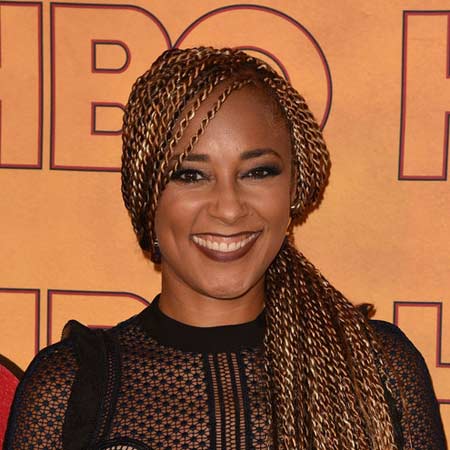 Amanda Seals aka Amanda Diva (stage name) has multiple profession; an actress, comedian, DJ, and recording artist. She was a touring member of the musical group, Floetry. She made her Hollywood debut in 1993 from the movie, Cop and a Half. The following year, she made her TV debut from Nickelodeon sitcom My Brother and Me.

Amanda Seales was born to Annette Seales on 1st July 1981 in Los Angeles, California under the birth sign Cancer. Seales is American by nationality and belongs to African-American ethnicity. Her family migrated from Grenada in the Caribbean to Orlando, Florida.

Seales attended Dr. Phillps High School. She then joined SUNY-Purchase and later earned a Master’s degree in African American studies with a concentration in Hip Hop from Columbia University.

Amanda Seales made her Hollywood debut in 1993 from buddy cop-comedy film, Cop and a Half directed by Henry Winkler. The following year, she made her TV debut from Nickelodeon sitcom, My Brother and Me. He shared the screen with Ralph Woolfolk IV, Arthur Reggie III, and Jim R. Coleman.

In 2006, she worked in crime drama mystery film starring, Samuel L. Jackson, Julianne Moore, and Edie Falco. Her other works include Identical, Ladies Book Club and Get Your Life.

As of 2018, Seales portrayed the character Barbara in ABC sitcom, Black-ish with Anthony Anderson, Tracee Ellis Ross, Yara Shahidi and Marc Scribner. Besides, she appeared as a host for her own show, Greatest Ever aired on truTV.

Seales replaced Natalie Stewart of the musical duo Floetry on tour with Marsha Ambrosius. The same year, she released her first EP, Life Experience. The following year, she featured on the song, ‘’Manwomanboogie’’ on Q-Tip’s Grammy-nominated album called, The Renaissance.

She also worked as a stand-up comedian and a host of the weekly podcast, Small Doses.

Amanda Seales has an estimated net worth of $3 million. She makes money from her multiple profession. Seales’ 1993 movie, Cop and a Half collected $41 million at the box office which was made with the budget of $4 million. IMDb rated the movie 3.9 stars ou of 10. The movie starred Burt Reynolds, Norman D. Golden II, Ruby Dee and Ray Sharkey.

She also earns a good amount from her production house, DivaWorks Inc. She works as a CEO of the company.

Seales has a Mercedes Benz price starts at $34,475. She is a social media ambassador for her mother’s home island.

Amanda Seales, the talented actress, and comedian is currently more focused on her career rather than involving in love affairs. She also announced that she is single via tweet,

The tweet clearly shows that she is single. She, however, had mentioned about her mysterious boyfriend via social media,

‘’ got that look in his eye. I've seen that b4. I had a boyfriend hv his 1st schizophrenic attack while we were 2gthr in college.’’

Since then she has never mentioned about the guy. Seales is close to Tiffany Haddish.

In 2017, she joined Truth, a national campaign to start an anti-smoking campaign. She also works for the empowerment of the young women and for the end of racial discrimination.

She earned the stage name, Amanda Diva which she changed back to her birth name in 2011.

Below is a video of Seales sharing her opinions on The Breakfast Club.