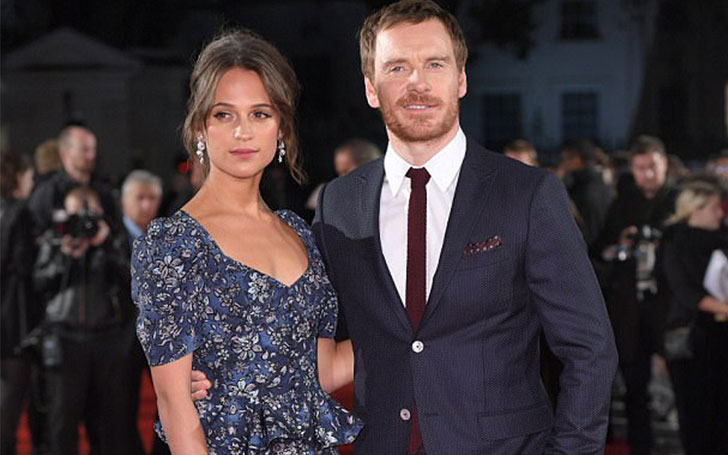 The high-profile couple, Alicia Vikander and Michael Fassbender are ready for their wedding bells. The on-screen love interests in 2014 film The Light Between Two Oceans who turned into a real-life couple has finally decided to settle down.

It is reported that Alicia Vikander and her long-term beau Michael Fassbender are scheduled to get married in a private ceremony in Ibiza.

How did the adorable couple, Alicia Vikander, and Michael Fassbender meet? How did they fall for each other? Let's have a closer look at their love story.

Alicia Vikander and Michael Fassbender Are Engaged-Wedding Dates and Venue

Together for over three years, Alicia Vikander and Michael Fassbender have finally decided to take their relationship to the next level. It is reported that the A-list Hollywood couple who has maintained their romance private is planning to get married in a secret ceremony on the island of Ibiza.

Alicia Vikander and Michael Fassbender in an event

Also read: How Much is Alicia Vikander's net worth?Know about her Career and Awards

“Guests have been told to arrive in Ibiza on a certain date and they will then be collected and taken to the hotel. “He’s [Michael] splashing out big time and it’s going to be the party of the year.”

The couple has maintained their romance away from the public for quite long, so it is no surprise that they are keeping their marriage such a private affair.

In one of the rare occasions; in an interview with The Sun last year,  Michael Fassbender revealed his love for Vikander.

He told The Sun:

The chemistry was immediate, the spark, the intensity. I said early on, ‘'This girl frightens me’'. She’s so fierce and brave . . . it kind of bowled me over.

In his next interview with Entertainment Tonight, the actor was all praises for his girlfriend:

She’s a very fierce performer and she pushes the boundaries of how far you can go. She’s definitely got all of those things in spades.

Just a few months ago, the twenty-eight years old Oscar-winning actress, Alicia Vikander, and her to-be husband, Michael Fassbender, moved in together in London. Guess they were preparing to live together as husband and wife after all.

How Did Alicia Vikander and Michael Fassbender Meet?

According to some online sources, the couple first met on the sets of The Light Between Two Oceans back in 2014. Wish to know five facts about Michael Fassbender, watch the below video.

It took no time for Vikander and Fassbender to take a liking to each other, and soon after, they started dating. The adorable couple has been together ever since.

Alicia Vikander and Michael Fassbender made their first public appearance as a couple at the Golden Globes in January 2016. The couple, however, tried their best to avoid the attention as they appeared on the red carpet separately- they even sat behind each other.

In an interview, talking about their private relationship, Vikander said:

“I think we’ve made a clear statement that we keep certain things just between us. It was very easy to unite, but that’s quite personal.”

“Each to their own. I’m not going to talk about my private life with a total stranger unless I feel like I need to. Why would I? I don’t.”

Also read: Alicia Vikander Aces It As Lara Croft In The First Look Of Tomb Raider

When X-men star, Fassbender was not seen there to support his girlfriend Alicia Viikander when she won the Oscar for Best Supporting Actress at the 88th Academy Awards, there were rumors that the two had split.

Proving all those rumors wrong, the duo is engaged in September 2017. Alicia and Fassbender married in a private ceremony in Ibiza, Spain, on 14 October 2017. The happily married couple currently lives in London.