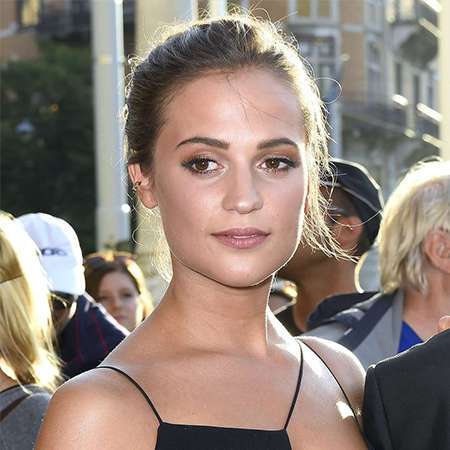 Alicia Amanda Vikander, a Swedish actress/ dancer, is known for her role of Gerda Wegner in The Danish Girl. She has appeared in numerous films and TV series including The Fifth Estate, The Man from U.N.C.L.E. and The Light Between Oceans.

She will be playing the role of Lara Croft in an upcoming action-adventure film Tomb Raider in March 2018. Alicia Vikander is a married to actor Michael Fassbender since 2017.

Amanda Alicia Vikander was born in Gothenburg, Sweden on 3rd October 1988. She is the daughter of Maria Fahl Vikander, an actress and Svante Vikander, a psychiatrist. Her parents separated when she was two months old.

She has five half-siblings on her father's side. Vikander’s ancestry is Swedish and one-quarter Finnish. She is of Swedish nationality and Caucasian ethnicity.

Vikander trained in dance at the Royal Swedish Ballet School in Stockholm for nine years. She also appeared in several musicals at the Gothenburg Opera. She traveled around the world for summer courses, training one summer at the School of American Ballet.

Vikander is well known in Scandinavia for her role in the popular Swedish TV drama Andra Avenyn and her starring performances in several films including (2010) and The Crown Jewels (2011).

With her role as Katarina in a film Pure, Vikander won the Rising Star Award in 2010 at the Stockholm Film Festival and the Guldbagge Award for Best Actress.

Vikander performed in the English language film adaptation of Anna Karenina (2012) and added Danish to her repertoire while working on the Nikolaj Arcel feature A Royal Affair (2012).

In 2014, she appeared in a fantasy film Seventh Son which loosely based on the novel The Spook's Apprentice. In 2015, she was a part of a blockbuster film The Man from U.N.C.L.E and The Danish Girl. She won Academy Award and SAG Award for Best Supporting Actress from The Danish Girl.

In 2016, she appeared in four films; Jason Bourne, The Light Between Oceans. Birds Like Us and Tulip Fever. In 2017, she played in Euphoria. She currently engaged in two films; Tomb Raider and Freak Shift. Tomb Raider will be released in March 2018.

Vikander is a married woman. She married Michael Fassbender on 14 October 2017 in a private ceremony in Ibiza, Spain. The duo dated almost three years before getting married in 2017. Vikander and Fassbender met on the sets of The Light Between Oceans in 2014.

Fassbender is a popular Hollywood star who has appeared in numerous films including X-Men and 12 Years a Slave.
She identifies as a feminist and has publicly denounced gender equality in film. In November 2017, she was one of 584 women who has called for the

Net Worth and Properties

Alicia Vikander’s current net worth is $8 million. She has earned a hefty amount of net worth from her acting career. According to a source, she earns nearly $1 million each year from her films. Her husband, Michael Fassbender has $30 million net worth.

In 2015, she was a part of a blockbuster film, The Man from U.N.C.L.E, which collected $109.8 million at the Box Office. The same year, she appeared in a romantic drama film The Danish Girl which earned $64.2 million worldwide.

She won Oscar Award from that film in a Best Supporting Actor category. The Oscar statue is worth $629 only and is 13.5 inches tall.

An Oscar awardee doesn’t get the financial reward directly but their paying scale bump from 10% to 80%. Which means Vikander's income has surely reached a new height.

Vikander currently resides in London with her husband. The couple also has a lavish car of Porsche 356.

She has won the Guldbagge award for best actress in 2011 and she also won Hamptons International Film Festival for her movie Anna Karenina, in 2012.