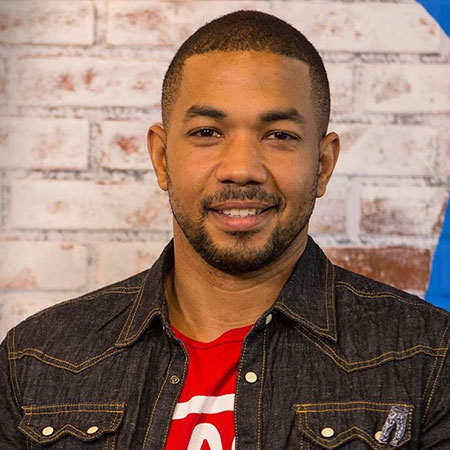 Alano Miller is an American actor who was born and raised in Orlando, Florida. He is famous for his role in TV series Underground. In addition, he has also appeared in many popular movies, TV series and as well as worked in the theatre. He is also famous for the three national titles he earned in oratory including Elks of the World, NAACP and Modern Woodsman of America.

Alano Miller was born on December 1, 1979, in Orlando, Florida, the United States under the zodiac sign Sagittarius which defines his personality to be generous, idealistic, and the great sense of humor.

He holds an American nationality and belongs to the mixed ethnicity of Cuban, Bahamian, and Jamaican. He has never talked about his parents so there is no information about it in the media. He grew up in Orlando with seven older siblings.

He completed his high school form Seabreeze High School in Daytona Beach, Florida. In Daytona Beach, he worked as a lifeguard and played basketball and football. Later he joined Purchase State College and graduated from there with Conservatory of Theatre Arts and Films.

Alano Miller used to do public speaking when he was at the age of 5 and after graduating from high school, he ama s sed a score of awards and titles including Most Outstanding Senior Award, Six-time Martin Luther King, Jr. Oratorical Winner, and the Key of the City of Orlando. He is also famous for the three national titles that he earned in oratory including Elks of the World, NAACP and Modern Woodsman of America.

Alano is a talented speaker and was able to win several oratorical awards in high school. In 1997, Bill Clinton awarded him Presidential Scholar Award.

His first theatrical role was as Oliver in Oliver Twist. He has acted in many theatres and some of his credited theatricals are Malcolm King in Nathan Louis Jacksons Broke, Marcus in Marcus or the Secret of Sweet, In the Red, Brown Water and The Brothers Size. All of this was written by the New York Times Award-winning playwright Tarell Alvin McCraney.

The first film he acted was in Champagne which was a short film released in 2008. Some of his movies include Loop Planes, Pour aimer, encore, and Wish You Well. Not only he has acted in films and theatre, but he was also able to make his appearance in television series that includes Royal Pains, How to Make It in America and Vegas.

Alano Miller has not revealed about his net worth to the media, but it can be a s sumed to be in millions. His main source of income is acting-appearance in many films, TV series and theatre. Alano is also considered as one of the richest actors in Hollywood and one of the highest paid black decent star.

Apart from acting, he is also one of the greatest theatre artist and model. He can also be seen in many ads and endorsements. According to PayScale, the average salary of an actor is around $50,326. Their salary starts from $19k to $220k with a median bonus of $1,005.

Alano has not talked about his personal life to media so there is not much information about it. Talking about his relationship he is a married man. He tied the knot to one of the most beautiful actresses DeWanda Wise in 2011. Their marriage ceremony was held privately and only their close friends along with their family members were invited.

The couple first met on the movie set in 2008. They dated for almost 3 years and finally made a decision to move their relationship to the next level. As of 2019, he is living a happy life with his wife.

I’m at loss for words as many are. We aren’t shocked that it happened. We’re shocked that it happened to him. This cowardly act won’t hold a brotha like him down. He’s been in these trenches for years fighting and all you’ve done is made his voice louder and stronger. You’ve awaken the lions den and stirred us to fight by his side and countless others. Prayers up indeed for your quick recovery of mind, body and spirit. We stand with @jussiesmollett and your family. Let justice be served!!

Taking about his online presence, Alano is active on social media Instagram and news media Twitter. As of 2019, he has about 24.3 k followers on the former and 9,754 followers on the latter.

In the video shown below, Alano Miller and Jasika Nicole is talking about the Second Season of Underground TV series.