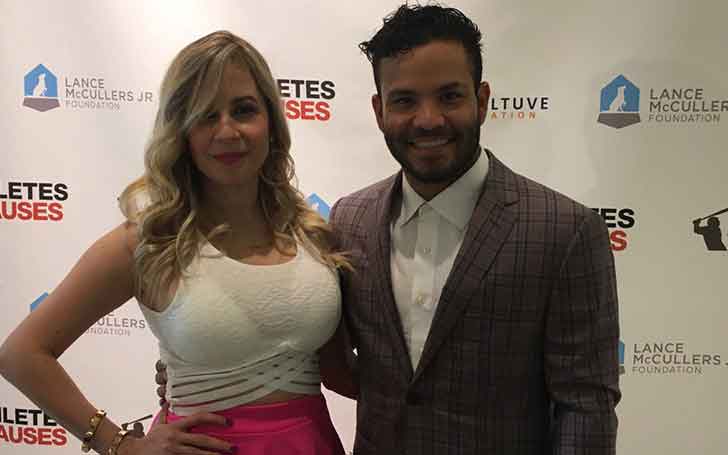 Jose Carlos Altuve aka Jose Altuve is a Venezuelan professional baseballer. He is All-Star 5-time MLB Star who is crafted with several awards.

We are all aware of his professional life, but what about his personal space? Is the player living a happy life with wife Nina Altuve? Do they share any children? Details about his relationship here.

How Is Jose Altuve's Relationship With Wife Nina? Any Children?

Jose Altuve is married to his longtime girlfriend Giannina Elizabeth Cimetta Sandoval aka Nina, whom he started dating at the young age of 16. Their relationship was also famous in their high school. Altuve and his wife Nina exchanged their vows on 20 November 2006 in his hometown Maracay, Venezuela.

As of now, their relationship is as strong as ever. Nina got pregnant in early 2016 and the couple is blessed with a child; an adorable daughter Melaine Andrea Altuve born on 1 November 2016.

Coming to the present day, the duo only has one child and recently celebrated their 12th marriage anniversary. The loving couple spent more than a decade of their married life free from rumors and controversies of divorce and separation.

Jose and his better half Nina have often been spotted vacationing together including their romantic trip to Punta Cana in the Dominican Republic, and a family trip to Disneyland along with their daughter.

Whenever Jose is free, he is seen engaged in something fun and interesting with his family. Either they are frequently seen lounging near the swimming pool and sunbathing or scheduled on doing some fun stuff.

As Jose was doing hard in baseball, he helped his wife to study further to be certified bio-analyst. She went to the University of Carabobo in Venezuela.