You may think you already know details about TV host Nicole Curtis, an expert behind HGTV and DIY Network’s home renovating show Rehab Addict, but the reality TV star leads quite the double life. On her show, she looks charming and wonderful like she’s got it all together, but behind the scenes, she’s had more than her share of drama.

The mom of two has spent over a decade in custody battles. Curtis’ also had numerous problems with legal authority and most members of her family. Here are the 13 fascinating facts you never know about Nicole Curtis:

13. Curtis is a former Hooters’ waitress

Before becoming a reality star, Curtis served as a waitress at different fast food chains, including Hooters and IHOP. According to People, one of her friends suggested her to apply for the job at the restaurant famous for its half-clothed waitresses.

Curtis with her friends while working for Hooters

To make ends meet, she worked in the restaurant as well as cleaned houses before her shifts.

12. Curtis started her own cleaning business

While Curtis was in college, she worked as a house cleaner and later started her own cleaning business after the birth of her first child Ethan. According to her, she started the business to be able to give time to her son.
Currently, she is not in a cleaning business; but shared that she still remembers various good cleaning tricks.

Nicole Curtis bought her first home in Tampa, Florida when she was just 18 years old. According to her interview with Quirky Inspired, Curtis said she couldn't afford a pretty home and bought the ugliest 1945 Ranch for only $52K. She paid $596.42 a month.

According to her LinkedIn bio, she is still serving as an agent for Keller Williams Integrity Reality in the Greater Minneapolis- St. Paul area.

In 2009, the DIY Network was looking for a real estate agent in the greater Minneapolis area when they came across her website, and they found her fascinating pictures.

They contacted her and called her for a test shoot. A year later, Curtis launched her show Rehab Addict on the DIY Network.

Curtis in a cool mood

In 2014, Rehab Addict moved to HGTV and became part of the channel’s prime time show. Currently, the season 8 is running in the HGTV which premiered on October 4, 2017.

8. She keeps American Flag Outside of Every house she renovates

According to the Weekly Standard, she hangs the American flag outside of every home she renovates. It seems like her way of showing patriotism towards her nations.

Curtis keeps personal details away from the media. When she became pregnant for the second time in 2015, she did everything to hide her pregnancy news from the world. ‘I wanted something to my own’ she told News Observer when she sat with them in October 2016. 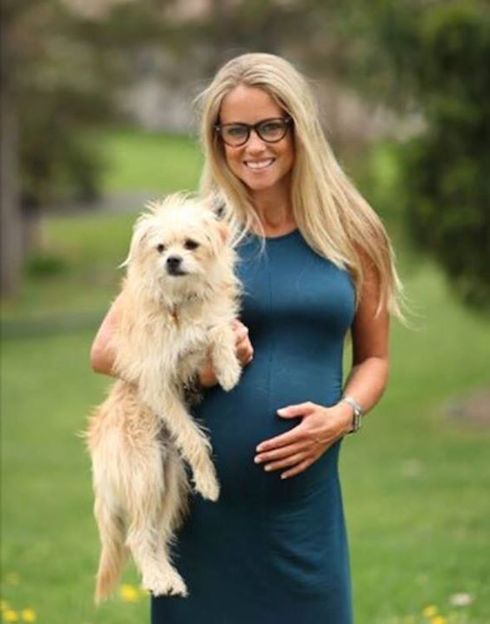 Nicole Curtis during her second pregnancy

She added that she carried prop to hide her baby bump and asked cameramen not to show her growing belly if possible. Curtis also did her best to cover up her baby bump at public events. Later, she revealed her pregnancy via her social media.

Nicole Curtis loves spending money to buy fashionable clothes and ornaments. In an interview with PopSugar, she told that her most prized salvaged item is an ‘Oscar de la Renta dress from the 1970s. She usually flaunts expensive dresses and pieces of jewelry in public events.

A few years back when she received a T-shirt on her birthday that says ‘old people, old dogs, old hoses’ which pinched her heart to start a good work.

Curtis and her dog Lucy

She decided to change her mentality towards old things. She eventually took this mantra and adopted two pups named Max and Lucy. She even takes them along her in television interviews.

In November 2012, Curtis bought a home north in Minneapolis and said that she would be fixing it up, the community had a high expectation for their property. However, a couple of years and the unrepaired house was in the same condition as it was for a long time.

That’s when neighbors started complaining about the safety concerns and lack of progress to the community; they took legal action against her.

Curtis bought this house for just $2 million and deadline for the construction of the house was a year. But, she did not communicate with city officials about the reason for delaying even after surpassing the deadline. Then, neighbors and house owner said that she did not care about fixing up the property and added that it was time to rake serious action against her.

3. Curtis Accused Of Hiding Her younger Son Harper from her father

Nicole Curtis and her ex, Shane Maguire, have been fighting for custody of their infant son, Harper, for over a year and rather than solving the problem, it has been getting worse.

In April 2017, Maguire filed the sixth motion against Curtis, alleging that she’s been keeping him from meeting his son, despite the court ordered visits.

Papers filed in court state that Curtis ‘continues to claim that Harper is sick and therefore unable to fly, something she has done since the onset of this case to avoid taking Harper to his father.

If [Curtis] did not want a young child to be on an airplane, she should not have moved from Minnesota to Michigan just days after the birth of Harper, they added.

Maguire also reported that he purchased a plane ticket to meet his son in March, but Curtis told that she and Harper would be in Atlanta that weekend instead and that he would have to buy a new ticket if he wished to meet his son. However, Curtis has not responded to any of Maguire’s claims.

2. Curtis is fit and active

Curtis is a health-conscious woman. She regularly does physical exercises to maintain her fit and active.

She even loves adventure and fun filling activities like hiking, biking, runs, kayaking and traveling. She frequently flaunts her active lifestyle on her Instagram.

1. Nicole Curtis says ‘My Life is not Absolutely Perfect.’

Curtis is happy with her professional life, but her personal life is strange. She is currently unmarried. According to some sources, she was previously married to Steve Lane but the duo allegedly divorced in 2009.

Curtis with her eldest son

Following her divorce, she was in a relationship with Shane Maguire for few years, but they ended their affair which led to the custody battle of their son.

Even now they have not solved out their problem. Curtis is a mother of two sons; Ethan and Harper. Ethan is the eldest son of Curtis- she welcomed him with Steve Lane.

In May 2015, she welcomed her second son, Harper with then-boyfriend Shane Maguire. In her autobiography Better Than New, she revealed that she knew about her second pregnancy shortly after her 38th birthday. However, after giving birth to Harper, his father began a custody battle with her.