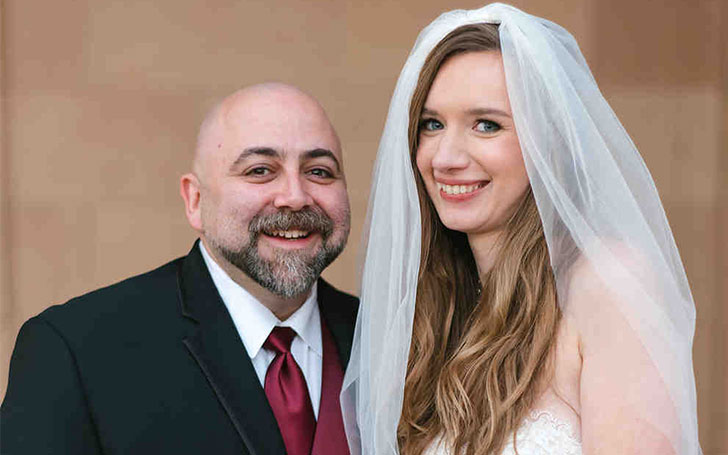 Ace of Cakes actor Duff Goldman married his longtime girlfriend Johnna Colbry on 19 January 2019 at the Natural History Museum in Los Angeles. The couple started dating in the year 2016 and exchanged the vows after three years of relationship.

The 44-year-old American actor and his writer girlfriend said 'I do's' in front of more than 250 people including their dearest persons. The wedding was held in the T-rex exhibition room.

Mindy Weiss who was the coordinator of the wedding shared the attendees' views about the place saying:

When they walked into the Natural History Museum, not only did they feel, instantly, that this was the location, but they also found humour in their guests being surrounded by wild animals.

The couple explained their wedding location as "Romantic yet Tropical" to the attendees. While talking about the food menu, there were five different wedding cakes, three showing the underwater theme with ocean bubbles & seaweeds and leafy sea dragons as well as meat cake.

I don’t know how Johnna feels about me likening her to a leafy sea dragon but they are beautiful and graceful and they’re gentle and they’re sweet and so is Johnna.

Martha Stewart, one of the wedding attendees shared a snap taken at the wedding venue; have a look:

#aceofcakes star @duffgoldman and @letushear have tied the knot! The @charmcitycakes baker said “I do” over the weekend in a wedding complete with an interfaith ceremony at @nhmla (surrounded by life-sized dinosaur fossils!), lush tropical details, and a whopping 5 different wedding cakes! From an ocean-inspired display of suspended cakes to a classic six-tier confection inspired by the lace on Johnna’s gown, each cake was an absolute showstopper. Swipe through to see the couple’s day come to life, and see more exclusive details in the link in bio! #marthaweddings : @amyandstuart | Venue: @nhmla | @mindyweiss | : @contemporarycatering | : @gillyflowersla | : @jampaper | : @charmcitycakes | @djjohnnyknight | Rentals: @tacer_losangeles | @bhldn | : @josabank | @taramascara10

The happily married couple, however, weren't engaged officially before they exchanged their vows. According to some sources, Goldman told his then-girlfriend to bring an engagement ring, however, instead of bringing the ring, Colbry came with a piece of butcher's twine. Goldman popped the question to his future wife, on 2nd April 2018.

Sources revealed the newly married couple jetted to Thailand for their honeymoon on Sunday, 20th January. Moreover, their wedding planner Mindy disclosed that the duo is actually going to have two honeymoons.

After the couple returns from their honeymoon. Goldman will be summing up his filming for a few weeks and then they will depart for their second honeymoon. The lovebirds will fly to some famous honeymoon destinations in Asia, Africa, and the Middle East among others.

As of now, the pastry chef and veteran TV personality reside in Los Angeles, California with his newly wedded spouse Johnna. n