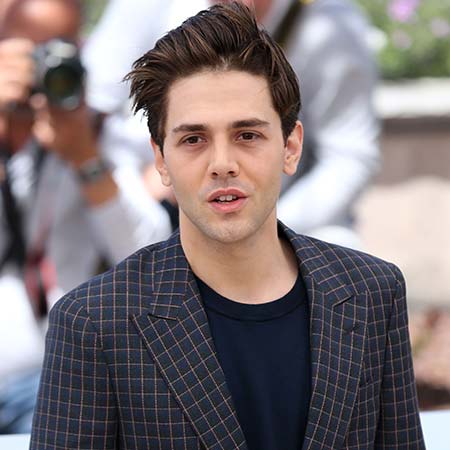 Canadian actor and director Xavier Dolan began directing at the age of 19. Both fans and critics loved his first project I Killed My Mother and he became one of the promising talents. His career reached a new height following his 2014 release Mommy. The movie was a staggering account of an emotional meltdown between mother and son. His subsequent success includes It's Only the End of the World and The Death & Life of John F. Donovan. For his unbelievable writing and directing skills, Dolan has also won numerous prestigious accolades like Jury Prize, Canadian Screen Awards, and more. Besides, his naughty-cherub good looks also brought him many lucrative contracts with several reputed modeling agencies and brands like Louis Vuitton.

Xavier Dolan was born on 20 March 1989, in Montreal, Quebec, in Canada. He is a son of Manuel Tadros, successful Egyptian-born Coptic Canadian actor and singer and Geneviève Dolan, a Quebecois teacher.

He holds Canadian nationality and his ethnicity is White American.

Dolan was raised in his hometown, Montreal along with his family and did his schooling there. He dropped out of college in Montreal after a weak in order to hang out with film critics.

Xavier Dolan got into acting at the very early age of four, through his aunt Julie, a production manager who suggested her mom to a TV drama audition. In 1997, he made his movie debut with a small role in the movie Heads or Tails. He gained worldwide attention after he wrote and directed the drama movie  I Killed My Mother, in 2009.

At the age of 20, Dolan's such an exceptional work even using his own funds from his extensive work as a child actor was really appreciated and praised by many film critics also. In an interview with Canadian newspaper Le Soleil, he also said that the movie was partly autobiographical.

The movie also received positives reviews from the critics. It was aired at the Director's Fortnight program of the 2009 Film Festival and gained full attention from the audiences as well as an eight-minute standing ovation. The movie won three awards: the Art Cinema Award, the SACD Prize for a screenplay, and the Prix Regards Jeunes.

In 2010, Dolan went on to direct the movie Heartbeats. His third movie was Laurence Anyways which was also turned out to the biggest hit, it initially struggled at the box office grossing roughly $0.5 million in Canada though.

The biggest triumph came in 2014 after Dolan became the director of the movie Mommy starring Suzanne Clément and more. The movie won the Jury Prize and it was also his first film to achieve significant success at the box office racking up over $13 million. In the following year, the movie also won the Cesar Award under the category Best Foreign Film.

In 2015, Dolan wrote, edited, and directed the movie It's Only the End of the World featuring Marion Cotillard, Léa Seydoux, and Nathalie Baye. The movie also won the Grand Prix as well as the Ecumenical Jury Prize.

The film generally received mixed reviews. For his work in the movie, he won a number of prestigious accolades which are César Awards for Best Director, Best Editing at the 42nd ceremony, and three Canadian Screen Awards under the category Best Motion Picture and Best Achievement in Direction.

In 2018, Dolan co-wrote, co-produced, and directed the movie The Death & Life of John F. Donovan starring Kit Harington, Natalie Portman, and more. It became a huge flop at the box office.

Besides, Dolan also directed many super hit music videos such as Hello, the lead single from her third studio album, 25 by Grammy Award-winning artist Adele. The video went viral breaking the Vevo record amassing more than 27.7 million views within 24 hours. For which, he also won the Juno Award for Video of the Year.

Dolan was also cast in the movie Boy Erased and Bad Times. As of 2019, he is busy with his upcoming project It: Chapter Two.

Xavier Dolan with his hard work and much struggles with a career has collected a large amount of money. His net worth as per Celebrity Net Worth is around $4 million.

Dolan at such a young age has directed many super hit movies and one of them was Mommy which became a critical and financial success grossing over $13 million all over the world. As per the report, the director's average salary is around $92,220 a year.

Dolan, likewise, has worked in many music videos and voiced in a variety of roles. He has also modeled for many brands and companies like Louis Vuitton. It also plays a vital role to boost up his net worth.

As of 2019, Dolan has over 707k Instagram followers. It is also the major part of his net worth as he can command over $1.5 K a sponsored post.

Xavier Dolan is openly gay. As of now, the director is not married yet and is also not dating anyone. The actor has kept everything about his love life, dating, and relationship away from the mainstream.

Dolan has also an incredible fan following on her Instagram account. He is a huge fan of legendary actor Leonardo DiCaprio. He often posts Leonardo's movies on his Instagram.