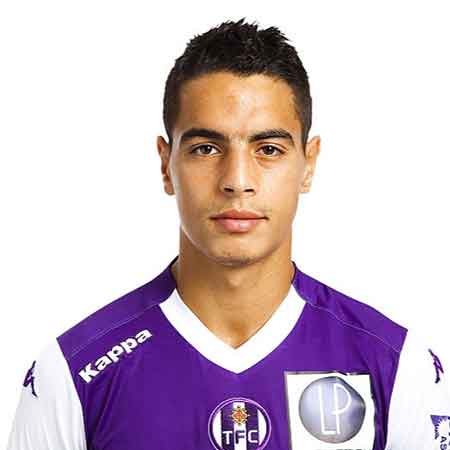 French professional football player, Wissam Ben Yedder is currently playing for the Spanish club, Sevilla and France national club. He has been playing as a striker for Sevilla since 2016. Yedder started his football career at a young age playing for the local club, UJA Alfortville. Till the date, he has made his appearance in 280 games scoring 119 goals.

Wissam Ben Yedder was born on August 12, 1990, in Sarcelles, Île-de-France, of Tunisian descent.  He started his football career at local UJA Alfortville in the fourth-tier Championnat de France Amateur. Later, he left the club and joined Toulouse FC of Ligue 1 in 2010. On October 16, 2010, Yedder made his professional debut for the team.

Ben Yedder recorded 15, 16 and 14 goals respectively in the following three Ligue 1 campaign. In November 2013, he scored a hat-trick in a 5–1 home win against Sochaux. The following year he was succeeded to score another treble with a 3-1 win against Valenciennes.

In September 2014, he scored a penalty in a 3–3 draw against Caen. He made 35 Ligue 1 goals for the team and became the highest scorer in the league in the 21st century. After the match against Lille in December 2015, he attained the milestone of 50 goals.

Ben Yedder signed a five-year contract with the Spanish club, Sevilla FC on July 2016 for €9 million ($10.65 million). On August 20, he started his first La Liga game and scored a goal in a 6–4 win against RCD Espanyol.

In December 2016, he scored 5 goals across Sevilla's 14–2 aggregate Copa del Rey win over  SD Formentera including a hat-trick. His performance made him the tournament's top scorer of the season along with Lionel Messi.

Ben Yedder registered a hat-trick in a 4–0 La Liga win on January 7, 2017. He scored all three goals in a group stage victory over NK Maribor in  UEFA Champions League campaign 2017–18.

On March 13, 2018, Yedder played as a substitute in the 72nd minute at  2017–18 UEFA Champions League round of 16 against Manchester United and scored 2 goals in the span of 4 minutes in 2-1 win and enable the team to play in the quarter-finals of the European Cup for the first time since 1958 and first in the Champions League era also. Out of the 83 matches, he scored 39 goals for Sevilla.

Ben Yedder scored one of two futsal matches for France and represented the nation 9 times at under-21 level. Due to his good performance at Sevilla, France football manager, Didier Deschamps included him in the team for two friendly matches against Colombia and Russia.

CAPTION: Ben Yedder playing for France SOURCE: Be in Sports

On March 23, he made his debut in the 3-2 loss to the Colombians by replacing  Olivier Giroud for the final 17 minutes. Yedder will probably make his Fifa World Cup debut from his home country, France in 2018 world cup in Russia.

Ben Yedder is associated with Sevilla since 2016 and he is the forward player of the team. Some of the professional football players of the team like Sandro Ramirez, Nolito makes $160k weekly salary. So, Yedder probably earns a similar amount. He also makes a fair amount of money with endorsement deals with various brands like NB. His estimated net worth is in millions as per some online sources.

Ben Yedder is one of those football stars who prefer to keep their personal life low-key. He hasn't been married yet and merely talks about his private life with media. Believing some online sources, he is possibly single at the moment. Yedder has over 169k+ followers on his social site, Instagram where he often updates his fans about his upcoming matches.