Whitney Port Welcomes her First Child with her Husband Tim Rosenman, Details About Their Married Life! 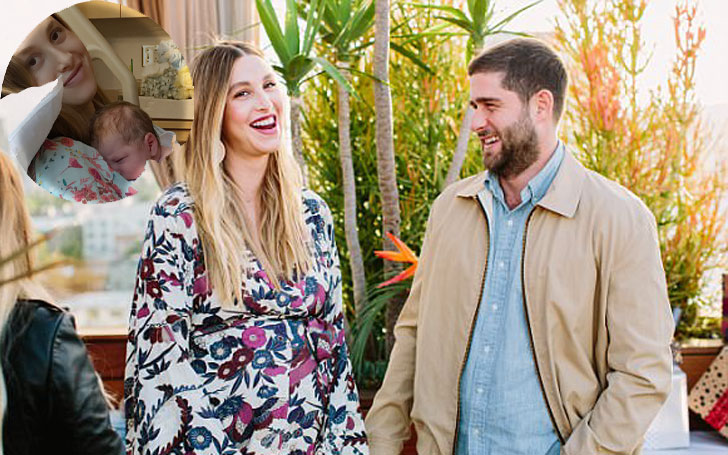 The reality star Whitney Port who rose to fame after being cast in the reality television series The Hills in 2006 has recently become a mom. Port and her producer husband, Tim Rosenman who got married in 2015 welcomed their first child, a son, on 27 July 2017.

Whitney had announced her pregnancy in February 2017 through her Instagram post. How is their married life going on? We have some interesting details about the couple!

The Hills star Whitney Port welcomed her first child, a son, together with her husband Tim Rosenman on 27 July. They named their son Sonny. The thirty-two years old reality star shared the big news on her blog on 31 July writing:

"So I have some news. No big deal, but I created another human being and then delivered him into the world at 12.30am Thursday morning. Timmy and I named the little man Sonny and I'm in love. I just want to talk about how I'm feeling."

The new mom also shared her happiness in her recent Instagram post where she shared a cute picture of six days old Sonny where he can be seen smiling.

She captioned the cute picture:

Port had announced her pregnancy through her Instagram post in February revealing that she is very excited to welcome her baby.

Whitney Port and Tim Rosenman first met on the sets of MTV reality series The City in New York. During the time, Rosenman was an associate producer of the show. They remained friends for some time.

Their romantic connection started shortly after Port broke up with Ben Nemtin in 2011. Apparently, Port was the first to approach Rosenman. She admitted in an interview with Daily Mail in April 2015:

"I definitely made the first move.I got his phone number and made up some excuse why I needed to reach him for something...I kind of felt he was never gonna try it with me. He's not shy, but I know in his past with girls he had difficulty making the first move."

The couple made their relationship official in 2012. After dating for about two years, they got engaged in November 2013. Even though Whitney Port and Tim Rosenman didn't waste any time getting engaged, they sure took their time to get married. The couple exchanged their vows in November 2015 in Palm Springs, after two years of getting engaged. Whitney Port wore a beautiful wedding dress by Ashi Couture for the big day.

Port also confirmed her wedding by sharing a picture of herself on a wedding gown in her Instagram post and she captioned it:  "Mrs. Rosenman."