What does Miley Cyrus' new tattoo look like? Why did she get a tattoo her dog Emu? 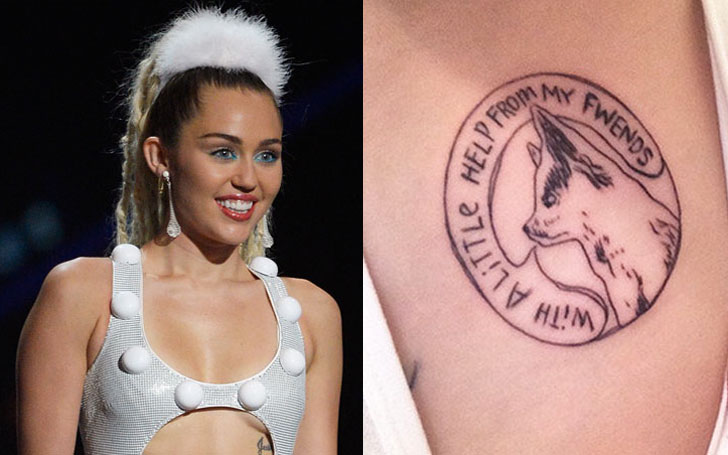 Miley Cyrus got inked again! What is it this time and where?

Well, this time it's her new dog Emu, a Shetland sheepdog who was adopted after the unexpected death of her Alaskan Klee Kai, Floyd in 2014.

The news was made public when the celebrity tattoo artist Dr. Woo, renowned for black and white tattoos, posted Miley's new tattoo on social media.

What is the meaning behind Miley Cyrus' new tattoo? What does it look like?

Cyrus had a dog named Floyd that passed away unexpectedly in 2014, to overcome the grief and for her love of animals,  she adopted a new dog and named it Emu. Did you know that Miley Cyrus also helped her fiance Liam Hemsworth adopt a rescue dog, Dora in 2016?

Miley Cyrus gave an almost spiritual statement about losing Floyd and getting Emu, here it is:

Also Read: What is Miley Cyrus' net worth in 2016? Know about her upcoming movies, songs, and her career

There will never be anyone like Floyd. There was a bond that was so deep it's irreplaceable but that's not what I am trying to do. Never will I replace Floyd and that's something I had to take time to understand. we had a very special memorial service for Floyd and I felt my angel Floydy give Emu his blessing. I prayed to Floyd to just give him a touch of his awesomeness and he has. He is so special and different than my baby Floyd and I think Floyd did that on purpose."

Miley Cyrus got a tattoo of Floyd right below her underarms after his death, reportedly she was giving a house party and smoking a 'joint' when she got the tattoo.

So, it is pretty obvious how she got her new dog Emu's tattoo as well. It is heartwarming to see how much she cherishes and cares for the bond between her and her pets.

Here's the photo of the tattoo posted by Doctor Woo

The tattoo is placed on her arms just above another tattoo, a  fish. She does not take Emu as a dog but she as her own kid. Besides, this new tattoo she has many other pet tattoos as well.

Also Read: Miley Cyrus and Liam Hemsworth were engaged in 2016. Are they married now

Miley's Floyd, an Alaskan Klee Kai, who was killed by a coyote in 2014 is placed just below the Wrecking Ball's singer underarm. The tattoo also has words that read:  'With a little help from my friends.'

Meanwhile, it was revealed that Miley has a role in  Guardians Of The Galaxy Volume 2, she is the voice of the new character Mainframe. Wish to know the five facts about Miley Cyrus' five facts, watch the below video.

The film opened in theaters all over the  U.S. on May 5. Given that the first movie did so well and has a large following, the second is bound do well. Will it help further Miley's career even more?

For more details about Miley Cyrus and other celebrity gossips, keep coming back to Article Bio.