Get informed about the tattoo-freak singer Miley Cyrus, here 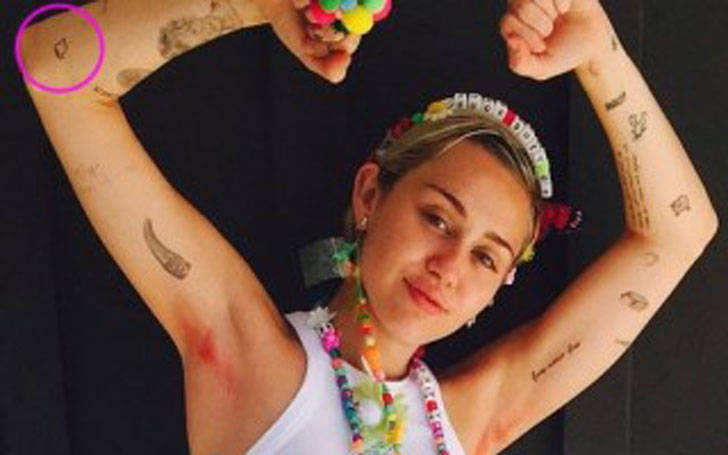 Miley Ray Cyrus, commonly known as Hannah Montana, is an American television and film actress and singer. She is best known for her role of Hannah Montana in Disney’s TV film Hannah Montana.

A globally known lady is also named as one of the hottest actresses in the Hollywood. Do you know this diva is also a tattoo freak?

Miley is crazy about tattoos and has more than twenty tattoos in her body. She has nine tattoos on her right hand alone and they all are tiny. In December 2009, she revealed her first tattoo named Just Breathe, tattooed on the left side of her rib cage. That tattoo was a tribute to her friend Vanessa and grandfather who both died due to cystic fibrosis, a lung cancer. In an interview, she said that,

It reminds me not to take things for granted. I mean breathing – that was something none of them could do, the most basic thing. And I put it near my heart, because that is where they will always be.

In 2010, media captured with her second tattoo named Love, which was tattooed on the inside of the right ear. Her third tattoo was Love, on her right pinkie finger. It is her family tattoo and her Parents and brother have the same tattoo on their pinkie finger.

Miley's other major tattoos are Cross, Dreamcatcher, Peace Sign, Anchor and so on. Her every tattoo have different meaning and intention; be it her tribute to grandparents or love towards her pet. Anchor tattoo is dedicated to her mother, whom she respects as an idol for her career success. Also, she tattooed the word Karma which reflects the cause and effect which prevails in nature.

The word Karma is based on Hindu and Buddhists scriptures. Additionally, in 2011, Miley got a tattoo on her left wrist of the ‘Om’ symbol, a sound or vibration which represents divine energy.