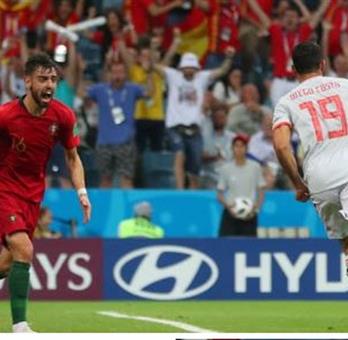 The most awaited match of today Portugal V. Spain started with a bang as the Portuguese scored an early goal at just 4 minutes thanks to a foul by Nacho on the captain, Ronaldo inside the D box. Ronaldo took the penalty and punished the foul with a goal. It made him the fourth player to score in four World Cups.

With a goal down Spain did try to get back in the game and even got a few chances to equalize. Under pressure, Spain almost conceded another goal but Guedes faint shot was blocked.

The equalizer for Spain came in the 24 minutes as Diego Costa single-handedly took on three Portuguese defenders to make it 1-1 for his country. It is going to be an interesting game and the likes of top-class players like Iniesta, Costa, Gonçalo Guedes and Ronaldo among others we can surely expect more goals as the game progresses.

The Portuguese captain strikes again to give his country the lead.  A simple shot from the 20 yard went right through David de Gea's hand. Before going into the half the score is Portugal- 2 and Spain-1

In the second half, Costa strikes again to level the game. The goal came at 54 minutes with a header. Just four minutes after a goal from Costa, Spain strike again this time a superb shot from Nacho Fernandez from outside the D area. It is his first goal for Spain.