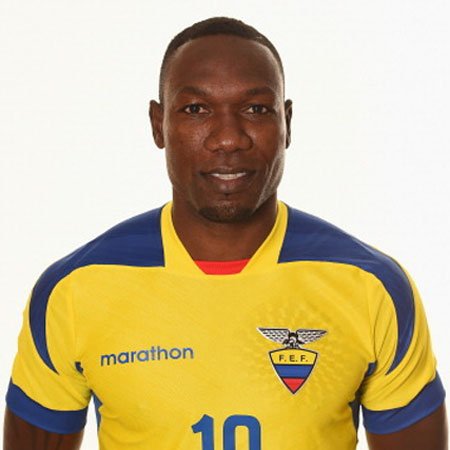 Walter Ayovi, full name Walter Orlando Ayovi Corozo also known as Macaco is footballer of National Team of nation Ecuador. He was born in August 11th 1979 in Camarones, Esmeraldes, Ecuador. He is recently playing for the Current Team of Pachuca of the Liga MX. He earlier played left wing midfielder for Club Deporyivo El Nacional in the Ecuadorian league. He plays as No.11 jersey for his team

Ayovi started his professional football career from a Serier A club, Emelec in 2000. He palyed for Emelec for 2 year . Later, on 23 January 2002, he was transferred to Barcelona Sporting Club for undisclosed amount. He remained on Barcelona SC’s squad despites of many rumours about linking him to several European club sides. He palyed there until 2006. Then he was transferred to El Nacional (2006-2008) In between the contracts he also played for a club in Dubai , Al Wasi Club (2004-2005). With the rumors about the interest of Club de Futbol Monterrey signing him , he was loaned shortly after the rumors in 2009. He then made his debut to the club on February 6th 2006 by scoring his fist goal on the 4th week match against Estudiantes Tecos. Because of his outstanding play in the game between Ecuador and Brazil, on 29 March 2009 CF Monterrey took their judgment to purchase Ayovi. He renewed his contract with the club in 2011 and in 2013 he was purchased by the club Pachuca which his has been his current club.

Walter step up in the National team in 2001. He was called up to the final squad for the FIFA World Cup 2002 held in Korea and Japan. Beacause of being youngest players from the National team, he made no any appearance in that tournament. Later in 2006 FIFA World Cup held in Germany, he played as a regular squad, but was not selected in the final World Cup squad. He participated in the 2007 Copa America where he scored a nice free kick against Columbia in a preparatory friendly for the tournament. He appeared in two matches in that tournament once as a substitute against Mexico and once as a starter against Brazil. Walter later became an important squad in the national team while competing in the CONMEBOL 2010 world Cup qualifiers. He played outstandingly  with the win against Peru(5-1). On 11 June 2009, he socred an outstanding goal in an important win against Argentina (2-0). He has been ranked as a essential player for the qualification of his team to the 2014 FIFA World Cup.