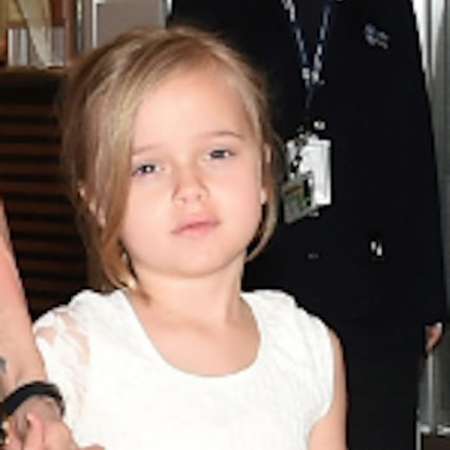 Vivienne Marcheline Jolie-Pitt is known mostly for being the biological daughter of the super couple Angelina Jolie and Brad Pitt. She gained further attention for her role in the massive hit movie Maleficent along with her mother.

Vivienne Marcheline Jolie-Pitt was born on July 12, 2008, at the Santa Maria clinic of the Lenval Foundation in Nice, France. She and her fraternal; twin, Knox Leon were born by C-section at 6:28 p.m. weighing 5 lbs. Vivienne has 4 other siblings.

Shiloh is her biological sister whereas Maddox, Pax and Zahara are her siblings who were adopted by Angelina Jolie and Brad Pitt.

Vivienne is currently studying. Vivienne is as enthusiastic and energetic as her parents Angelina Jolie and Brad Pitt. Angelina Jolie is a prominent American actress who is best known for her work in various movies for which she has been awarded an Academy Award and three Golden Globe Awards.

Brad Pitt, on the other hand, is a prominent actor who has received a Golden Globe Award and three Academy Award Nominations. Both Vivienne parents are philanthropists. Vivienne is known for her appearance in the film, Maleficent along with his mother Angelina Jolie and other cast members Sharlto Copley, Elle Fanning, and more.

Vivienne played the role of the child version of Princess Aurora. She is known for her natural acting talents. Maleficent has definitely turned out to be a starter for her career in Hollywood. The audiences who love Angelina Jolie are anticipating the next performance of Vivienne. They hope to see Vivienne on the center stage soon.

Not much is known about this seven-year-old kid. She is like any other ordinary school kid. Her studies have not been halted by her work. Jolie and Pitt named her Vivienne which means Live or Alive.

Her middle name Marcheline is a tribute to Jolie late mother Marcheline Bertrand so the combination of her name means Live Marcheline. Vivienne according to Jolie has a taste for everything pink.

Vivienne Marcheline Jolie-Pitt is expected to be as humanitarian as her parents are. Several stories about her innocent kindness are known to the media. Vivienne is still a child and therefore does not have any boyfriends.

She is a lovely innocent kid with blond hair. The pictures of her twin Knox and her together were sold to people and Hello! For a reported$14 million which is estimated to be the most expensive celebrity photograph ever taken.

Her parents Jolie and Pitt married in 2014. The couple, however, divorced after a couple of years.

Vivienne Marcheline Jolie-Pitt is currently only 11 years old and is adored for her looks and for her performance in Maleficent. She is also nicknamed Viv, Vivi by the people who know her. For her role in Maleficent, Vivienne received $3000 per week plus $60 per diem as her salary. The movie was turned out to be the biggest hit at the box office racking up over $758 million worldwide.

Her net worth exceeded more than those of some of the Hollywood actors. Jolie and Pitt are also the cause of her being famous in the media. Most certainly her roles in the future will give her the awards she has been direly hoping for.