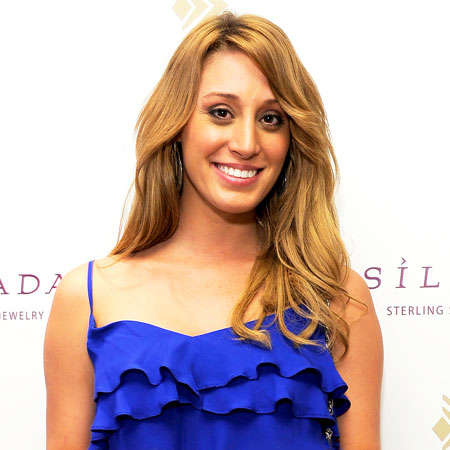 Marketing Representative Vienna Girardi came to limelight after winning the reality show, The Bachelor: On the Wings of Love, season 14. At the season finale, Jake Pavelka proposed her with a 2.27-carat diamond ring, however, the couple's romance and engagement ended few months after the show aired its last episode making their separation the most controversial break up in the Bachelor history.

Vienna Girardi is currently engaged to her racer boyfriend, Todd Allen. The couple who were expecting twins in 2017 lost their babies only after 18 weeks due to miscarriage.

Vienna Girardi was born on 29th May 1986 in Florida, the United States of America. She is a Gemini. As per nationality, she is American and belongs to white ethnicity. Girardi earned a degree in Interpersonal Organizational Communication.

Vienna Girardi rose to fame after appearing in ABC’s reality show, The Bachelor: On the Wings of Love, season 14. The show was aired on 4th January 2010 which featured Jake Pavelka, a pilot as a bachelor. Girardi was one of the contestants among other 24 ladies.

During the show, Vienna Girardi received the first rose in the third week and later, received the last rose in the last episode after the elimination of Tenley Molzahn. Reportedly, she received several backlashes for talking bad about her co-contestants. Despite all the allegations and bad reputation, she became the winner of the show. On 1st March 2014, she was declared as the winner and got engaged to Pavelka.

After winning the show, Vienna Girardi appeared in Bachelor Pad, a reality show where she partnered with Kasey Kahl. The couple, however, eliminated in the sixth week placing the third position on the show.
Besides that, she has also appeared in Entertainment Tonight, Live with Regis, The Bachelor: Jason & Molly's Wedding, Dancing with the Stars and so on.

Prior to appearing on the shows, Girardi worked as a marketing representative. She also used to work in the Hooters as a waitress.

Vienna Girardi, the former winner of The Bachelor: On the Wings of Love, season 14, might have acc u mulated a huge fortune, however, the exact amount is not made official yet.

As per some sources, the contestants of The Bachelor earns $100k and as Vienna Girardi was the winner she probably earned more. She has also appeared in several shows so, we can a s sume that her net worth is in six figures.

Vienna Girardi is engaged to her longtime boyfriend, Todd Allen, a NASCAR racer. The couple got engaged in October 2016 after dating for almost three years. Girardi in 2015 revealed about her pregnancy with twins via Instagram. She even posted her sonogram report (now deleted) showing ‘Twin A’ and ‘Twin B’ in a heart-shaped image. She wrote, ‘twice the blessing twice the fun’ inside the picture.

But on 5th August 2017, Girardi announced that she lost her babies due to TTS (Twin to Twin Transfusion Syndrome). She wrote about her miscarriage on her Facebook page,

This is the hardest thing I have ever had to write. On Aug 3rd, I went in for an ultrasound bc the Perinatologist notice one of my twins had more fluids than the other which was the first sign of TTTS(Twin to Twin Transfusion Syndrome) this is when one twin takes more nutrients than the other.

The doctors had warned me that if I did not go into labor and deliver the babies, I was taking the chance of risking my own life and causing an infection in my uterus but they could not survive at only 18 weeks.

They also said that there was a very slim chance under 5% that the babies could survive and the fluids in their amniotic sacs replenish themselves so as any mother would do I did everything to save them but their hearts stopped beating on day two which is also when I went into a septic shock with 104 fever.

My little angels went to Heaven on Aug 5th and I was rushed into the OR for emergency surgery and was in the ICU for 4 days. RIP My Sweet Angels.

Though she has no children of her own. She has a goddaughter, Hayden.

Previously, Vienna Girardi was engaged to Jake Pavelka, the winner of The Bachelor: On the Wings of Love, season 14. But the relationship did not last long as they called off their engagement after living together for almost three months.

Their separation was one of the controversial breaks up in the history of the show. In an interview, Girardi said,

It started about a month after our dating. The first month we were together was great like, he was crazy about me and then from there it just kind of went straight downhill and it wasn’t like we were in a relationship like I felt like a relationship when cameras were rolling around red carpet so we’re out in public."

But like at home it wasn’t like we were in a relationship what was it like at home lonely. I tell him all the time I just wanted him to want to be around me and talked to me and kissed me and like a normal relationship.

She further added that he was emotionally abusive and short tempered. To which Pavelka responded,

I’m disgusted with you. You sold me out to a magazine for payment and then flirted with me all weekend.

Pavelka further revealed that she cheated on him, however, both of them has denied each other’s allegations.

Prior to Pavelta, Vienna Girardi was engaged to her pastor's son but the engagement did not last long. She, later on, eloped with a guy named Josh Riley and got divorced only after four months. During their relationship, her former husband claimed that she cheated on him with his friend. Not only this, she also took $5k from his bank account for the purpose of a breast implant.

Here is a video where Girardi is talking about her miscarriage: