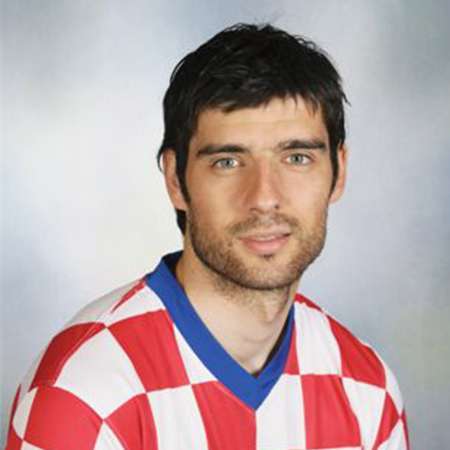 Vedran Corluka is a Croatian football player who was born on 5th January 1989 in Derventa, SFR Yugoslavia. He stands for height 6ft 4 inch and his weight is 181 kg. He plays for Croatia national team and Lokomotiv Moscow. Though he has played in other positions like across the defensive line, right back he has also played as a center back. He had made his professional debut in 2003 for Dinamo Zagreb. In 2007 he had moved to English Premier League club Manchester City where he made £8 million. After the season he moved to Tottenham Hotspur. There he joined Lokomotive for four seasons. Before making his first team debut in August 2006 in a match against Italy he internationally represents Croatia at various youth levels. After then Vedran has represented the country at European Championship in 2008 and 2012.  His salary hasnot been disclosed.

Corluka had started his professional career in 2003. He was sent to Inter Zapresic where he played for one season. After that in 2005 he returned to Dinamo Zagreb. When he established himself as a key player he then helped them to win Prva HNL title for three seasons in row from 2005-2006. In the 2006 season he had also played as dominant part in Croatian cup 2006.

After giving consistent strong performance on 2nd August 2007 he was signed by Manchester City. On the opening weekend of 2008-09 he had scored his first goal in 4-2 at Aston Villa. He had also scored the decisive spot kick in 4-2 penalty shoot in the UEFA Cup second qualifying round match. On 31st August he had played his last match for the City against Sunderland and had thrown his t-shirt in the crowd at the end of the match,

On 1st September 2008 it was announced that he had signed six year contract with Tottenham Hotspur and charged £5.5 million. There he had also joined his best friend Luka Modric. He was severely injured during the game against Stoke City on 19th October. After 10 minutes of field treatment Corluka was immediately rushed to the hospital. Fortunately it was announced that there is no serious damage. On 1st March 2009 Corluka scored his first and Tottenham’s only penalty in shootout loss to Manchester United I the League Cup. On 3rd October 2009 he had scored his first Premier League goal for Tottenham during 2-2 draw against Bolton. On 2nd February he had played full 90 minutes match at right-back ahead of injured Alan Hutton getting victory over Blackburn Rovers at Ewood Park.

Corluka had signed on loan for Bundesliga club Bayer Leverkusen on January 2012 for the remainder of 2011-12.On 4th February Corluka had made his debut for the club in 2-2 draw game against Stuttgart at Bay Arena by playing full 90 minutes match. The defender had assisted Lars Bender’s brace in 2-0win against Koln for the first time on 25th January. On 5th May Coratian gave last appearances for the club in 4-1 thrasing of 1. FC Nurnberg. Due his financial difficulties he could not buy his contract at the end of the season.

Locomotive Moscow had announced that Corluka had signed from Tottenham Hotspur for £5.5 million on 27th June 2012. On his debut match for the club he scored 3-2 victory over Mordovia Saransk. On September 2012 as well as on March 2014 he han evend won the monthly poll among the Loko supporters in the social networks and he was also named the best player of the month.

Corluka had started to play for Croatian under-21 team and then eventually he progressed and started playing in his country’s senior national team. Soon he made his debut on 16th August 2006 against world champions Italy in Livorno, Italy. Croatia won the match by 2-0, by the same time Corluka had also turned 20. He had satisfied the critics by his very god and solid performance against the experienced Serie A. He had also become one of the key players under the current head coach Slaven Bilic during the UEFA Euro 2008 qualifying campaign. When Corluka was in final match of the tournament Croatia’s exit came against Turkey in extra time and penalty shootout. For the Preliminary squad for European Championship in Poland and in Ukraine the defender was included.

Corluka’s parents are Jozo and Anda. They had come from a village near Derventa, Modran. The family had moved to Zagreb, Croatia due to civil wasr in Bosnia in 1992. His father still workers thereas an engineer and his mother is a judge. He has a brother.