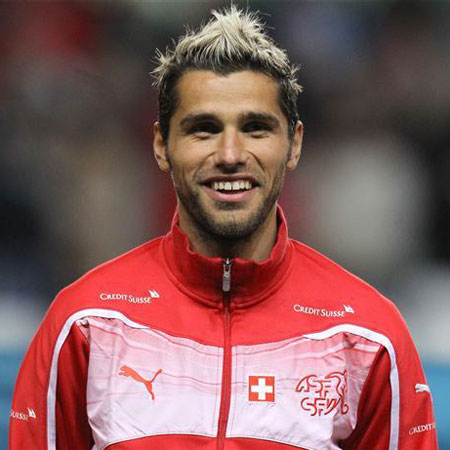 Valon Behrami is a Swiss professional footballer who plays from the current team of S.S.C Napoli from Squad No.85 and from Switzerland National Football Team as a Midfielder. Valon Brhrami was born in the year 1985 April 19 at Mitrovica, Kosovo, Serbia. Although born in Serbia, because his parents, Mother Halime and father Ragip lost their jobs, they moved in the village of Switzerland and started their living there. Valon Behrami cherishes the height of 184 cm and weight of 76 kg. He is a married man. Elena Bonzanni is the name of his Partner. This couple has child, a beautiful daughter named Valentina Behrami.

Valon Behrami is a talented Mid-fielder. He has very strong tackling capability with the interception of ball. He is skilled in blocking the balls from the opponents. He likes to play in short passes and shoot from distances. He is good at shooting and passing. He dives into tackles being the victim of fouls very often. He is agile and has good pace in the game. His stamina and strength are also good keeping him durable in the field.  Valon Behrami plays as a defensive midfield as his primary position but this versatile player can play well enough from right back as well as central midfield. According to the 2012 salary report, his salary is reported to be 1.4 million Euros. His current market value is 16 million Euros. Lian Sports is the name of his agent.

Valon Behrami started his youth career with the native club Stabio in the year 1993. In 1997, he moved to Chiasso. Joining Lugano in 2000, he was promoted in the senior team of Lugano in the year 2002 and made his professional debut from the club. He played for a season in Lugano appearing in 2 games. But because of his impressive performance, Valon Behrami was signed by the Italian Club Genoa in 2003. He was loaned to Verona by Genoa for a season 2004/2005. He appeared in 24 matches from Genoa. After the impressive season at Verona, Lazio signed him. He spent three years at Lazio playing in 65 matches with 4 goal scores.

In 2008, he was signed by West Ham United from Lazio. In this season, he was badly injured. His knee and ankle twisted badly which resulted in the premature end of 2008/2009 season. He appeared in 58 matches from this club bagging 4 goals. In 2011, he moved to Fiorentina where he appeared in 40 matches in a season. In 2012, Valon Behrami joined to Napoli. He is in the team since 2012 and has appeared in 48 matches so far.

Valon Behrami has the experience of playing in the under 18 and under 19 matches from Swiss National Team. He is the first team of the Swiss National Football Team since 2005. He has appeared in 44 cap matches bagging 2 goals for the team. He has the experience of playing in 2006 and 2010 FIFA World Cup and now it’s the turn of 2014 FIFA World Cup.