TOWIE Star Ferne McCann is Pregnant-Who is the Baby's Father? Why Did She Dump Her Ex-Boyfriend Arthur Collins? Full Story 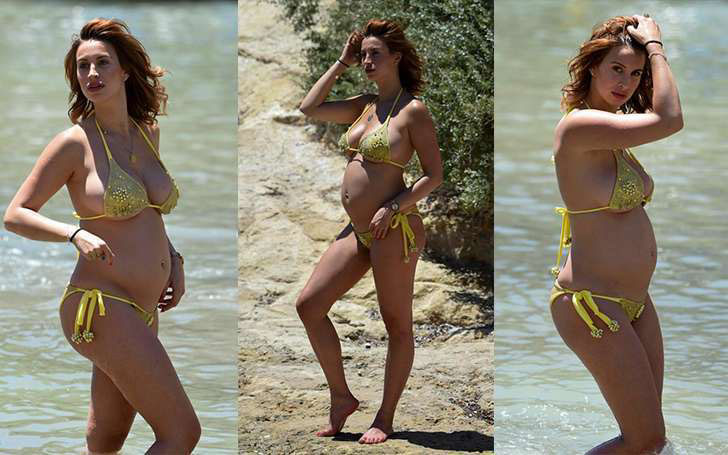 Former actress of The Only Way Is Essex ( TOWIE), Ferne McCann, is pregnant since April 2017!  The soap opera star who has been promoting body positivity ever since her pregnancy seems more beautiful than ever with that pregnancy glow. As per speculations, McCann is expecting to deliver coming November.

The gorgeous mother-to-be is currently single- she and boyfriend Arthur Collins have broken up. So, the burning question in the media right now is ' who is the father of McCann's baby?' Could Arthur be the father? Or is it somebody else?

Ferne McCann, who quit the British soap opera The Only Way is Essex for her ''sanity'' as she had become a pantomime character, is now pregnant with her ex-boyfriend's child.  McCann who was hoping to marry this ''ex-boyfriend'' seems to be battling the pregnancy alone. But the question here is 'who is Ferne McCann’s ex-boyfriend?'  And, why did they break up in such a crucial stage?

It was April when FerneMcCann revealed that she was expecting her former boyfriend’s baby, it's been confirmed that this former boyfriend is Arthur Collins. But little did she know, she was harboring dreams with a scandalous man who'd  leave her life devastated.

Why did Ferne McCann Dump Arthur Collins Despite Being Pregnant With His Child?

How would you feel if you were expecting a child and hoping to spend your whole life together but then he goes missing? Devastated, right? To make it even more tragic a case, McCann found out that Arthur Collins is guilty of an acid attack case that happened at a night club in London, Dalston.

It was the night before the nightclub acid attack when Ferne McCann told Arthur Collins that she was expecting his child.

In the recent interview with OK! Magazine, Ferne said:

Initially, I was devastated.What I had planned and was getting excited about had disappeared in a matter of moments.It was so hard to deal with what happened but then I realised it was not about me, but about my child....I'll do my best for my baby.

It must have taken a lot of guts to accept the situation and decide to have the baby!

After all these months of despair, it seems that Ferne McCann has moved on for her good and is keeping herself confident and vibrant.

What Does FerneMcCann Say About The Baby? Is it a baby boy or a baby girl?

Ferne McCann says she doesn't want to know the sex of the baby before birth. She has, however, listed some of her favorite names for the baby.

Talking to Mirror Online at the Daily Mirror and RSPCA's Animal Hero Awards, McCann expressed her feeling about how the unborn baby has made her feel beautiful about herself and has made her love her body

Here’s what she said:

I feel like this is the first time I've properly loved my body. I just love the bumps so much that I love it. I look at myself in the mirror and I'm like yeahhh!

My boobs have literally come from nowhere, I swear to god, but now I've got used to them. It's all part and parcel of the pregnancy. It will come in handy when the baby comes and I want to breastfeed. Let's hope they stay!

Ferne McCann is one excited mother-to-be. To find out if she gives birth to a boy or a girl, keep coming back to Article Bio.