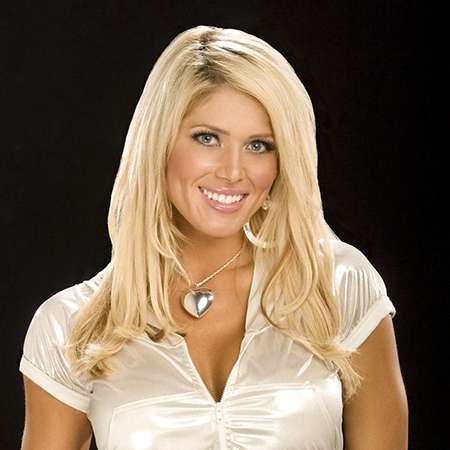 Torrie Wilson is a model, actress, and professional wrestler. She gained huge recognition following her appearance in World Wrestling Entertainment (WWE). Besides, she is also a fitness competitor who also won the Miss Galaxy competition in 1999. She has also appeared in a number of video games.

Torrie Wilson was born on 24th of July in 1975, in Idaho in the United States of America. Apart from her success as a professional wrestler, she has also made herself recognized as an American model, actress, and fitness competitor.

Wilson, although is now known for wrestle mania, had a shy attitude in her early childhood. Wilson found her interest in modeling during her high school. She suffered from anorexia nervosa and bulimia in her teenage and later recovered from the disorder. Later she moved to Los Angelos to pursue her career.

Wilson did for studies from Boise State University in U.S.A

Torrie Wilson's Wrestling career started as she attended WCM (World Wrestling Championship). She participated in several games of Wrestling after that. She also made her appearance as a villain in 2001 on Smackdown! She was among favorites of several during Invasion storyline.

Later in 2003, Wilson was also seen in the cover of Playboy magazine. She also appeared as a ring announcer in absence of regular announcer in WWE Smackdown. She went through several on-screen romance, relations, and complications until she was released from her WWE contract in 2008.

Wilson also appeared in FHM magazine. She has been in the list of most desirable women in the world on Ask Men.com. In 2009 she appeared in a reality show named I’m a Celebrity..Get me out of here! Lately, she was seen in a film’s music video in 2011.

Torrie Wilson has collected a large amount of money from her multiple professions. As per celebrity net worth, her estimated net worth is around $5 million, in 2019.

Torrie Wilson first became a friend with Peter Gruner (known for his on-screen name Billy Kidman) after they met in Wrestler Mania and as a fitness competitor. Later they started dating each other and they finally got married in 2003. But later in 2008 news reported that Wilson filed a case of divorce against  Billy and got separated in 2008.

Later she started dating Nick Mitchell but it didn't go well. During 2011 she was seen with Alex Rodriquez but it also didn’t go so long.

The 1998 Miss Galaxy was honored with Miss NOW and WCW Magazine’s 1999 Female of the year. She was also awarded WWE Golden Thong Award. She appeared in Playboy cover. She was listed as World’s sexiest woman in the world in 2007.