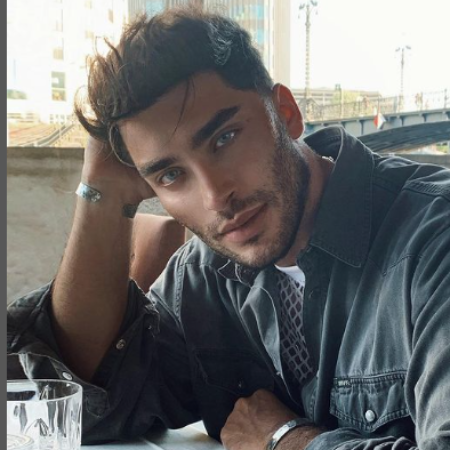 Toni Mahfud is a German artist, model, social media star, and photographer. He is also a YouTuber who shares his arts and speed drawing on his own YouTube channel. The aspiring model and YouTuber have already been part of the endorsement deals with the high-rated brands including Adidas, G-Star, and Nike.

Toni Gabriel Mahfud was born on December 2, 1994, in Hamburg, Germany under the zodiac sign of Sagittarius. As of May 2022, the model is 27 years old. He was born and raised in an artistically inclined family. His mother is Maisoun Mahfud and his brother name is Jan Mahfud.

Mahfud grew up with his only brother, Jan with whom he had a close bond in childhood. He holds a German nationality and he belongs to a mixed ethnical background as his parents are from Syria. When Mahfud was at the age of 4, he would draw sketches of his favorite cartoon characters. He completed his education at the local school in Hamburg; he was interested in drawing and making sketches during his childhood.

Further, he is 6 feet 2 inches tall and weighs around 75 kg. He has brown eyes and brown hair. Further, the model is believed to have gone through knives as his plastic surgery and eye color are much in the limelight.

The German photographer used to share his artwork on Facebook and which gained him thousands of followers. After some time, he started sharing his arts and sketches on Instagram and Twitter as well. Besides the sketches, he also started uploading his own pictures which even increased his fan followings.

Meanwhile, Mahfud started getting several modeling offers from top agencies such as Tommy Hilfiger after he started uploading his photos on his social media. He worked in many commercial advertisements with Tommy Hilfiger. He started getting popular among the youngsters in Germany as well as across the world which eventually gained him a contract with IMG modeling agency later he worked in promotional campaigns for the brands like Adidas, Tighe, Nike, and G-Star Raw.

Toni is a multi-talented personality, who is equally talented in acting, modeling, and sketching among others. With these skills, he has been offered some acting roles in American and German Films. As a talented star, he wishes to maintain a pure artistry background, saying that he will try everything possible to be a reputable and famed artist.

Toni Mahfud's Net Worth is estimated to be more than $4 million. He has accumulated a whopping worth from his modeling career, and as a social media star and a YouTuber. He even did promotional campaigns for famous brands which helped him in earning a handsome amount of money. Besides, the German public figure might earn good money as a photographer. With his jaw-dropping good looks, he might get films offer soon.

According to the sources, Instagram stars get paid for their posts as per their fans. Some statistical figure which demonstrates the earnings of the Instagrammers through their posts are:

Personal Life: His Wife Or Girlfriend?

Mahfud is devoted to his modeling career. At present, he is not dating any girl and is living a very ecstatic single life. But once, there was a rumor that Mahfud was dating a model Ruhama Negassi. Many of his fans thought Negassi was his girlfriend after he shared a picture with her holding her hand.

On May 4, 2017, they appeared together in the ABOUT YOU AWARDS, which was held at Mehr Theater in Hamburg, Germany. Likewise, they again appeared on November 9, 2018, on the red carpet of the GQ Men Of The Year Award 2017 at Komische Oper. The rumor about their relationship was fueled after their frequent appearances at the public event, however, the pair never addressed their affair rumor. Besides, the artist is yet to marry and doesn't share any kids with anyone.

Besides, Mahfud has a huge female fanbase on his social sites. He has 3.3m followers on his Instagram as of 2022. He is more popular for his looks and fashion sense.

You May Also Like: Aaleeyah Petty, Emily Ratajkowski, Sommer Ray