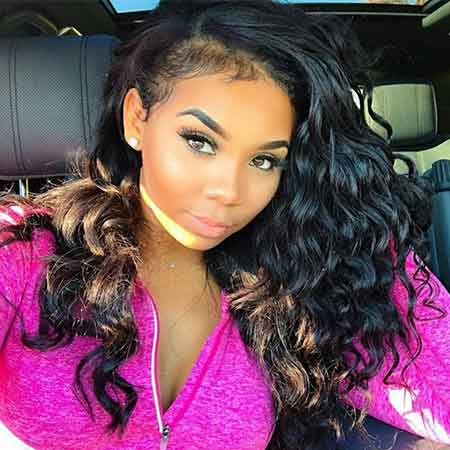 Aaleeyah Petty is a social media personality and an entrepreneur who is particularly popular on social media like Instagram and now deleted app called Vine. Aaleeyah came into the public eye after collaborating on Vine with popular social media stars like Melvin Gregg, King Bach, king Keraun, Wuz good. Aaleeyah who describes herself as a fitness model and an actress posts series of fitness videos on her social media.

Aaleeyah Petty born on July 3, 1994, in Chicago, Illinois, the United States under the birth sign Cancer. People of this sign are usually deeply intuitive and sentimental.

Due to her secretive nature, Petty has not revealed about her parents and family background.

Though we are not aware of the institute where she received her education, as per the sources available, she was a top student who got straight A's on her every subject. She used to be in a track team of her school but she stopped doing it so she could focus more on her schoolwork.

She even graduated high school and completed the two years of college but didn't get her Associate's degree. However, she is planning to get a degree when she accomplishes some of her modeling goals.

While Aaleeyah was in school, she used to dress up for cla s s and her best friend started taking her photos and uploading on Instagram. After a short period of time, several businesses contacted her and offered her some free apparel to display the items on her Instagram account.

After a while, she started to charge the companies so that she could pay for her tuition from that money.

Aaleeyah came into the public eye after collaborating on now deleted app Vine with popular social media stars such as Melvin Gregg, King Bach, king Keraun, Wuz good. In 2016, she even collaborated with Brittany Renner for a hair product advertisement which made her more famous among youngsters.

Soon she opened her new account by the name (@aaleeyahpetty) and received more followers than before. As of December 2018, she has  1.4 million followers.

She received about 115,000 followers within the first month after opening her new account. The gorgeous damsel, who describes herself as a model, actress, host, and entrepreneur, is actually a fitness enthusiast too and often shares her fitness videos.

All those videos have gathered a huge viewership and followers which helped her to earn a large amount of popularity and made her one of the glorious personalities on Vine and Instagram.

Petty is also active on Twitter where she has 22.6k followers.

Aaleeyah's main source of income is her Instagram account. She gets paid on the basis of her number of followers, sponsored posts for brands, selling her photography, and also from the responses of audiences. As per the sources, her net worth is estimated to be around $400k.

Aaleeya, as of 2018, is living in Los Angeles, she relocated there when she was about 19 years old. Talking about her relationship status, she is yet to be married but is in a serious relationship.

She is dating a famous American basketball player named Cameron Payne who plays for Chicago Bulls. The couple has been spotted having dinner dates and attending events many times, but surprisingly they are yet to confirm their affair,

Prior to Cameron, she dated an American professional basketball player Qunicy Cortez Miller in 2014-2015.

She even had a romantic relationship with a famous rapper called Nayvadius DeMun Wilburn aka Future in 2015. She even got the opportunity to get close to American Hip-Hop artist and record producer Rich The Kid aka Dimitri Roger.