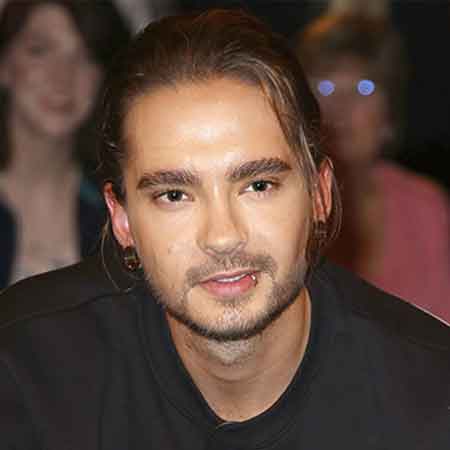 Tom Kaulitz is a German musician who is a guitarist of the band, Tokio Hotel. Their debut album is named Schrei which was released in 2005 which sold over half a million copies. The band has released few other albums like Zimmer 483, Humanoid, Kings of Suburbia and Dream Machine which were a huge hit.

Tom Kaulitz was born Tom Kaulitz-Trumper on September 1, 1989, in Leipzig, German Democratic Republic. He grew up with his twin brother Bill Kaulitz who was born 10 minutes after his birth. They used to live in Hamburg but later on moved to Los Angeles.

The main reason for them to move to Los Angeles is because of the growing robberies and stalkers in their neighborhood.

He learned to play the guitar from a mere age of seven and received a guitar as a gift from his stepfather when he was nine. Kaulitz's stepfather is also into music and owns a music school named Rock's Cool.

Tom Kaulitz is professionally a guitarist, producer, and songwriter who is the lead guitarist of the German rock band Tokio Hotel. The band was formed in 2001 and includes Tom himself, his brother Bill Kaulitz, George Listing and Gustav Schafer.

Kaulitz is the guitarist, Listing handles the bass guitar, Schafer is on the drums and his brother Bill is the lead singer. They gained a lot of success in the music industry delivering some cool songs. In their career, they have sold over 10 million CDs worldwide.

Their first album, Schrei was released on Universal Music Germany, a global music corporation in the year 2005 which sold over half a million copies. Later on, the band released albums namely Zimmer 483, Humanoid, Kings of Suburbia and their latest Dream Machine was released in 2017. Their success in the music industry led them to win around 110 awards so far.

Tom Kaulitz is estimated to have a net worth of $25 million which he earned from his huge career as a musician.

In 2007 for the albums Screen and Zimmer the band earned a sum of $75k and $150k respectively. While in the year 2009 their album Humanoid sold over 50 thousand copies and earned $75k.

Tom Kaulitz is in a relationship with Victoria secret's supermodel Heidi Klum. The couple first met at the show Germany's Next Top Model. After their first meet, they came close and felt connected eventually falling in love with each other.

The couple confirmed their relationship only after attending a party of jewelry designer Lorraine Schwartz at West Hollywood in March 2018.

Kaulitz and Klum are seen in a lot of PDA moments in the open and looks like they are deeply in love.  Before being in a relationship with Klum he was married to a German model, Ria Sommerfeld in 2015.

The former pair started dating in 2011 and tied the knot in 2015 but soon separated a year later in 2016 due to their growing differences.

Kaulitz is a person with dashing looks and usually dresses up in hip-hop style. He is mostly differentiated from his beardy looks, dreadlocks, and his lip ring. As for his height, he stands 6'1 feet tall and flaunts a bohemian hairstyle. Growing up he used to be a hip-hop fan and among several artists, his favorite is German singer Samy Deluxe.  As for television shows he likes watching Scrubs.

As for his hobbies, Kaulitz enjoys making graffiti arts, jamming to songs and partying at clubs. He owns around 17 guitars which he collects as a hobby since he loves them so much. Besides he has an unusual hobby of collecting the caps that he wears on tours.

He loves his brother who was born 10 minutes after him very much and feels he is blessed to have a brother like him.  He states that he can never trust any girl ever like he trusts his brother Bill Kaulitz.

The best birthday present I ever got was 10 minutes after I was born.