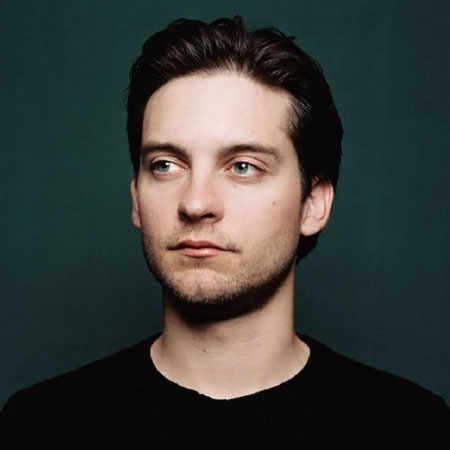 He started his acting career from the movie The Wizard in 1989. He has appeared in numerous movies including The Cider House Rules, Wonder Boys, The Good German, Brothers and The Great Gatsby.

The forty-two-year-old Maguire was born on June 27, 1975, in California, U.S to Wendy and Vincent Maguire. He has four half-brothers. He holds American nationality and belongs to White American ethnicity.

He spent most of his childhood moving from town to town with his parents and other family members. During his childhood, he wanted to become a chef and enrolled in a home economics class as a sixth grader.

Tobey dropped out from his high school and did not return back due to his transient nature of his school years. After that, he pursued an acting career.

Career Tobey Maguire initially began his acting career as a TV actor in bit part roles in series like ‘Roseanne’ and ‘Blossom’; however, his first appearance in a film was characterized as dumb in a minor role in the film The Wizard in 1989.

In 1993, Maguire was cast in the film ‘This Boy’s Life’ alongside Robert De Niro and a young Leonardo di Caprio. He was also cast in the role of a teenager who was a friend of the character played by Di Caprio.

In 1998, Maguire appeared in the film ‘Fear and Loathing in Las Vegas’ and followed it up with a lead role in the critically acclaimed ‘The Cider House Rules’ and ‘Wonder Boys’.

After appearing in these films he was known as a versatile actor who could pull off a wide variety of roles. But he got his biggest break when he was cast in the role of Spider-Man in the fantastic movie 2002.

In 2006, Maguire appeared in the film ‘The Good German’ in a negative role and also played a guest role in the movie ‘Tropic Thunder’ alongside Robert Downey Jr.

Maguire then appeared in the 2009 film ‘Brothers’ as a prisoner of war earned him rave reviews. The movies also featured by Jake Gyllenhaal.

In 2013, Maguire starred in Baz Luhrmann’s The Great Gatsby along with Leonardo di Caprio and followed it up with Pawn Sacrifice. In 2017, he voiced in the animated movie The Boss Baby alongside Alec Baldwin, Steve Buscemi, Jimmy Kimmel, Lisa Kudrow and other Hollywood stars.

The 42-years-actor is a vegan. He was declared as the world sexiest Vegetarian by PETA. In a magazine named Premiere, Sam Raimi implied was romantically involved with his co-actor from Spider-Man.

When he was busy in the shooting, he met jewelry designer Jennifer Meyer and they started dating each other. After three years of dating, they got engaged in 2006 and have a daughter named Ruby Sweetheart Maguire who was born in 2006 before their marriage.

The couple married in 2007 in Kona, Hawaii. They have their second child named Otis Tobias Maguire who was born in 2009. The couple announced their separation and were divorced officially in 2017.

The popular actor has appeared in several movies till dates. His most popular movies Spiderman has a grossing of $821.7 million which helps him to add up his net worth. His recent movie The Boss Baby collected $498.9 million at the Box Office.

His current net worth is $75 million. Maguire lives in a lavish mansion of $3.375 million in West Hollywood. He also has a Mercedes S400 car.