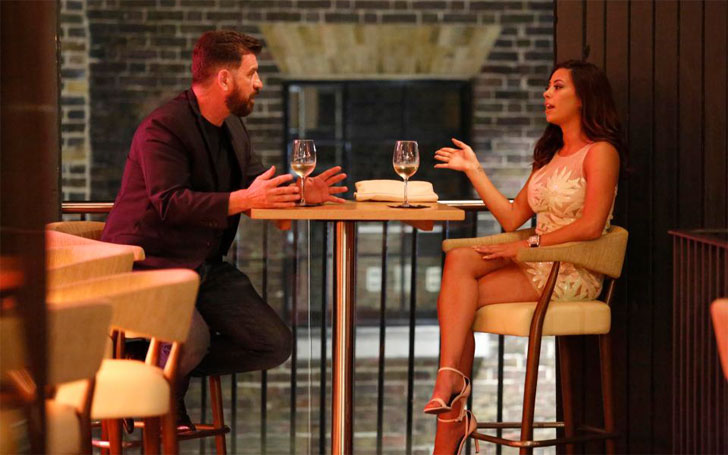 Love is in the air for Nick Knowles whose love life has been tough after his divorce with his wife Jessica Rose Moor in 2016. The Television star seems to have found his new love after over a year of his divorce from his wife.

Knowles is all loved up with  Ex TOWIE star Pascal Craymer who is 24 years younger than him. Guess you do find love in a hopeless place? How do you think things started between Pascal Craymer and Nick Knowles? Let's learn more about Nick Knowles' new girl friend and their relationship history!

It is reported that fifty-four years old Tv star Nick Knowles is currently dating the former TOWIE star Pascal Craymer who is 30 years old. According to a source, Knowles and Craymer first met through a mutual friend.

The lovebird duo was caught flirting on a dinner date at Gabeto restaurant in London's Camden on Thursday evening where they appeared in each other's arms a good amount of time.

The former Miss England finalist looked stunning in a thigh-skimming mesh frock with floral print and pink jacket whereas Knowles wore a T-shirt, black blazer and blue jeans with black shoes for the date.

A spokesperson for Craymer said to the source,

It's very early days. They had a wonderful night. Let's see what happens.'

Another source told The Sun that the chemistry between Craymer and Knowles was 'amazing'.

“The chemistry between them was amazing - it went so well. The pair were seen leaving the restaurant looking cosy with their arms linked and clearly looking comfortable in one another’s company."

Pascal has previously been linked to her ex-TOWIE co-star Mario Falcone. She also briefly dated Ashley Cole who is a soccer player.

Knowles married for the first time in the 1990s. After his divorce from his first wife, the TV host met fellow-TV presenter Suzi Perry on the sets of City Hospital in 2000. Knowles and Suzi Perry shared a live-in-relationship. The couple called it quits in September 2003.

Knowles then started dating his Jessica Rose Moor in 2009, who later became his second wife. After dating for three years, they got married in September 2012.The couple together has three children: Tuesday Knowles, Tyrian-J Knowles, and Charlie Knowles.

Nick and Rose founded an antique shop and home design consultancy in Eton in November 2013. Their marriage lasted for only four years. They announced their separation in January 2016. Knowles is a father of four: Tuesday Knowles, Edward Knowles, Tyrian-J Knowles and Charlie Knowles. They are popularly known as the "Known Knowles"

Knowles was also romantically linked to Emmerdale’s Gemma Oaten in 2016. The rumor of their romance started after the pair were spotted together at the TV Choice award.