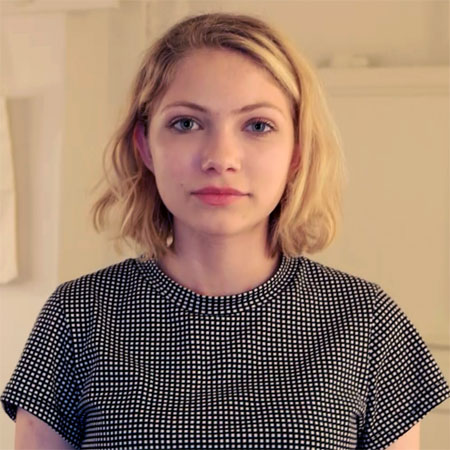 Tavi Gavinson is an American writer, journalist, and film actress. She came to limelight due to her fashion blog Style Rookie, which she created at the tender age of 12. She later shifted her focus towards pop culture as well as feminist discussion and founded the Rookie Magazine when she was 15. In 2014, TIME magazine also named her one of The 25 Most Influential Teens of 2014.

The young, ambitious, talented, stylish, independent fashion phenom, Tavi Gavinson was born in Chicago, Illinois, US, on April 21, 1996. She grew up in the suburban town of Oak Park, Illinois along with her elder sisters, Mariam Gevinson and Steve Gevinson.

Tavi’s mother, Berit Engen, is a weaver and part-time Hebrew instructor and her father, Steve Gevinson, is a former English high school teacher. Tavi belongs to American nationality and ethnicity wise, she is of mixed ethnical background.

Gavinson graduated from Oak Park and River Forest High School in her hometown Illinois. Following her high school level, she also took a gap for a couple of years in 2014/15 before attending New York University.

By the age of 12, Tavi Gavinson started a fashion blog, Style Rookie. The blog featured photos of under 11 years old in distinctive outfits and her commentary on the latest fashion trends. The blog soon started attracting over thirty-thousand readers a day.

Gavinson was also invited to attend Paris Fashion Week and New York Fashion Week, due to her blog’s popularity. The pop magazine also funded Gavinson to make fashion-related trips to Tokyo and Antwerp.

At the beginning of 2011, Gavinson decided to stop writing primarily about fashion and she later founded Rookie Magazine, in the fall of the same year. The website focuses on issues impacting teenage girls and content is also written by teenage girls.

Gevinson first appeared in a short film, First Ba s s, in 2008. She later featured in the 2013 film, Enough Said. The film was filmed in Los Angeles on a budget of $8 million and it grossed a box office collection of $25.3 million.

Apart from her acting, Gevinson also made her appearances in several TV series. Gevinson dubbed as “Queen of the Millennials”, in MSNBC chat show So Popular!, hosted by Janet Mock. She then appeared on The Nightly Show with Larry Wilmore on a panel critiquing, Sean Penn’s Rolling Stone interview with EI Chapo.

The 21-year-old Tavi Gevinson is an unmarried woman. But, it doesn’t mean that Tavi hasn’t involved in any relationships. Tavi broke up with her boyfriend after dating for a long time. The couple first knew each other while they were students at the college.

After she broke up with her college sweetheart, she went straight to New York and also sought help from her intimate friend Tylor Swift. She eventually shared her condolences and heart felt words in an interview with the nymag.com on August 10, 2014, and she stated,

“I flew straight to New York for a wedding, and then I visited Taylor Swift at her home in Rhode Island. I hate being heartbroken, but who better to discuss it with than Taylor Swift? I had some time in Oak Park to reclaim everything that had happened in my life thus far as my own. And actually, coming out of the breakup has kind of reignited my love for fashion because it's a way of a s serting a new identity and becoming a new person and giving yourself space."

She prefers keeping her personal life to herself, due to this very reason.

Though Tavi’s successful career has showered her with a hefty net worth which she has not revealed yet to the media, some sources claim that Tavi’s net worth is estimated to be $5 million.

Tavi currently lives in the new home at 35 story building, 300 Ashland, in Fort Greene, which she shared through Instagram in March 2017. A bedroom in her building rents at $3500 including other additional facilities such as a 24-hour concierge service, fitness center, and many other.