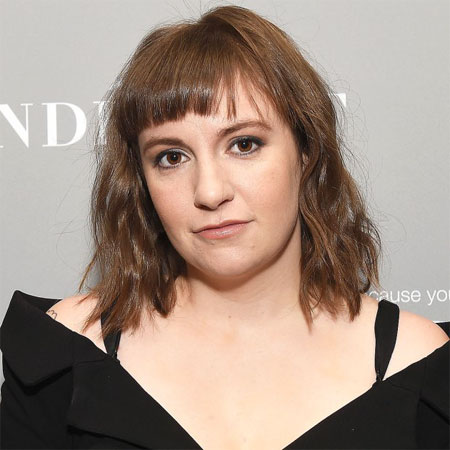 Lena Dunham is a writer, producer, and director. She is best recognized for starring, writing, and creating the popular HBO series named Girls. She received several award nominations in her career.

She was included in the annual Time 100 list of the most influential people in the world in 2013.

Lena Dunham's net worth is $12 million at present and earns $150 thousand per episode.

Lena Dunham was born on 13th May 1986 in the New York City, USA. She is an American and is of White ethnicity.

Her father Carroll Dunham is a painter while her mother Laurie Simmons is a designer and a photographer. Her father is a protestant and mother is a Jewish. She also has a younger sister named Grace. As a child, Lena was diagnosed with the obsessive-compulsive disorder and till today she continues to consume a low dose of an antidepressant.

Dunham was schooled at Saint Ann’s School in Brooklyn. She graduated in creative writing from Oberlin College in 2008.

While in Oberlin College Lena started writing short and feature films. She created the web series Delusional Downtown Divas in 2009. In the same year, she also created her first feature film Creative Non-Fiction.

She then wrote, directed and acted in Tiny Furniture. Lena Plays the lead role, her mother plays her mother and her sister plays her sibling. Lena’s television series Girls was aired by HBO on 15th April 2012.

She has written, directed and acted in the series. Three seasons of Girls has already been produced as of January 2014. She signed a $3.5 million contract with Random House to publisher first book, "Not That Kind of Girl: A young woman tells you what she’s learned ."

Until 2013 Lena Dunham has received two Golden Globe awards for her HBO series Girls and she has been nominated eight times for Emmy Awards. In 2003 she made it to Time Magazine’s 100 most influential people in the world.

Lena Dunham's net worth is $12 million at present. She earns $150 thousand per episode. She signed a $3.5 million book deal with Random House Publishing in October 2012. The bidding for her book was extremely competitive, initially starting at $1 million.

She reportedly earned $4 million between June 2013 and June 2014, from book sales, her television series and more.

Though she is criticized for being heavy she never is seen feeling uncomfortable about it.

She stands at the height of 1.60m tall. She is active on Twitter and Instagram with millions of followers.

Lena Dunham is a hyperactive person as her interviews and works show. She created a stir on Tweeter when she posted a picture of herself wearing a Muslim veil with the caption “I had a real Goth/fundamentalist attitude when I woke up from my nap”. She was criticized for being racist and dumb because of this.

She later deleted the photo and apologized. While in an interview for The Guardian Lena Said “People called me fat and hideous and I lived.” She said while talking about her weight issues that in her starting years, she got roles like of bouncing ball, a security guard or of a fat man.

She is also criticized for her series Girls as being racist, of including only white main leads.  Lena has lots of tattoos done. She has a floral tattoo on her arm and on her back, she has tattooed an illustration from the children book “Eloise” by Kay Thompson. She is a feminist.

It was public that since 2012 she has been dating the lead guitarist of FUN Jack Antonoff.