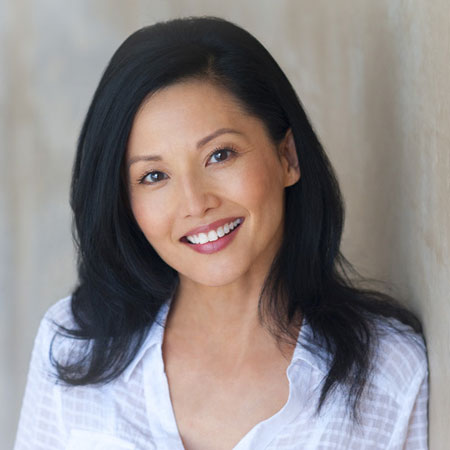 Japanese actress and singer, Tamlyn Tomita is known for her role as Kumiko in the American martial arts drama film, The Karate Kid Part II. Her other notable works include Come See the Paradise, The Joy Luck Club, Robot Stories, Picture Bride, Gaijin 2: Love Me as I Am and The Day After Tomorrow. Tomita was the 50 Most Beautiful People in the World by People Magazine in 1991. She also won the Asian Media Award at the Asian American International Film Festival’ in 2001.

Tamlyn Tomita was born Tamlyn Naomi Tomita on January 27, 1966, in Okinawa, Japan. She belongs to Asian ethnicity and holds Japanese nationality. She is of Filipino and Okinawan descent.

Tomita was born to Tomita Shiro and Asako Tomita. Her father was a distinguished Japanese-American who interned at Manzanar, California, during World War II. He also helped to found the first Asian Taskforce in the Los Angeles police department. Tomita lost her father in 1990.

Tamlyn Tomita graduated from the Granada Hills High School in the San Fernando Valley of Los Angeles. She then majored in history at The University of California, Loss Angeles.

Tamlyn Tomita began her acting career in 1984 when she was traveling as Nisei Week Queen to Hawaii, where Tomita was selected as part of a casting call by director John G. Avildsen. She was then offered to play in 1986 American martial arts drama film, The Karate Kid Part II as Kumiko.

In 1990, Tomita worked as a lead actress in the drama film Come See the Paradise, which earned positive reviews but was a commercial disaster. Her next significant role on the big screen was in the 1993 American film, ‘The Joy Luck Club’. The movie revolved around the relationships between Chinese-American women and their Chinese mothers, directed by Wayne Wang.

She is also a popular television star. In 1987, Tomita was cast in an episode of U.S. television series, Tour of Duty as VC Peasant Woman. The same year, she worked in American television soap opera, Santa Barbara which was a huge success and won various Emmy Awards in different categories.

In 1984, Tomita won the title of Queen at the Nisei Week Pageant in Los Angeles. The following year, she was also named Miss Nikkei International before becoming an actress.

Tamlyn Tomita was known as one of the 50 Most Beautiful People in the World, chosen by ‘People Magazine’ in 1991. She was also honored with the Asian Media Award at the Asian American International Film Festival in 2001.

In 2017, Tomita won the Jury Prize under the ‘Best Actress’ at the ‘FantaSci Film Festival’ for her role in the short film Real Artists. The same year, she also won a Southern Shorts Award for the same role.

As of 2018, Tamlyn Tomita has an estimated net worth of more than $3 million, as per some online sources.

Tomita’s most notable work is an American martial art drama film, 'The Karate Kid Part II,’ was a huge success earning $115.1 million at the box office.

Tomita has given many hits to his audiences, and some of his highest grossing movies are listed below;

Tamlyn Tomita is possibly single. Previously, she dated American actor, Greg Watanabe, who played Isaac on the MyNetworkTV serial Watch Over Me. The alleged couple who worked together in a 2006 independent film, Only the Brave maintains a low profile relationship.

Tomita is very close to her mother and is often seen spending quality times and vacationing together.

Here is a video of Tamlyn Tomita revealing her Parents' Love Story!!