One of the famous Canadian actors, Tahmoh Penikett, is best known for playing Karl "Helo" Agathon on SyFy's 2004 television series Battlestar Galactica. His one of the best role in the television series, Supernatural.

Tahmoh Penikett was born on May 20, 1975, in Whitehorse, Canada, under the birth sign Taurus. He is a Canadian as per his nationality and belongs to a white ethnic group.

He was born to parents Lulla Sierra Johns and Tony Penikett. His father is a politician along with his sisters Sarah Penikett and Stephanie Penikett.

Penikett graduated from the Victoria Motion Picture School before joining the Lyric School of Acting in Vancouver.

In 1996, Tahmoh began his career from Murder on the Iditarod Trail, a television movie. He made his big screen debut with Short film Go-Go Boy in 2002. Later, he worked as Conrad in Sandra Goes to Whistler, a 2006 short film.

In 2010, he played the lead role of Matt Ellman on SyFy's miniseries Riverworld, an adaption of the science fiction books written by Philip José Farmer. Later, he worked in an episode Resurrection of TV show Smallville. 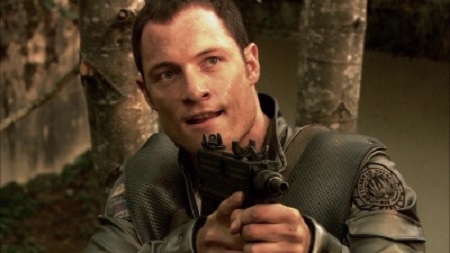 In 2004, he portrayed a police officer for a predominantly gay neighborhood in The L Word's 2004 episode Losing It. In 2009, he was cast as Paul Ballard in Joss Whedon's sci-fi drama series Dollhouse. In 2012, he made his guest appearance as a politician, Jim Martin, in the first season of Showcase's Continuum, in 2012.

Besides, in 2014, he guest-starred in the 200th episode of Criminal Minds as Michael Hastings. Also, he worked in the award-winning web series Riftworld Chronicles in 2015.

Tahmoh has an estimated net worth of $1 million as of 2019. The main source of his income is his successful career as an actor.

Penikett earns in the same range as other actors like Larisa Oleynik, Carly Foulkes, and Christopher Abbott.

The 44-year-old Canadian actor is not married yet and is living a single life. Tahmoh prefers living a low profile life as there is no news about his dating or married life. Also, there are no records regarding her past affairs. Currently, he is busy building his career rather than his love affairs.