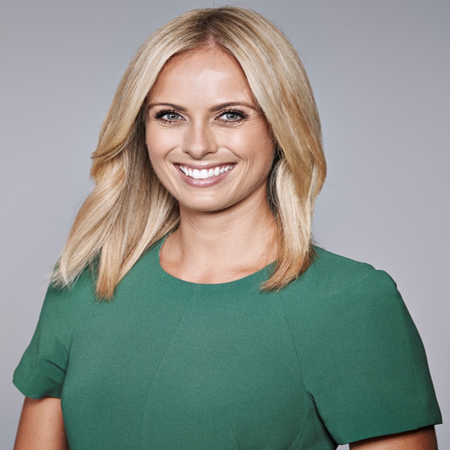 Sylvia Jeffreys is a famous Australian journalist as well as a news presenter. She is currently working as the weekly news presenter on the Australian television show Nine Network’s Today and also hosts in Nine's Netball coverage.

Sylvia Jeffreys was born on 23 April 1986 in Brisbane, QLD, Australia. She belongs to white ethnicity and holds an Australia nationality. Sylvia grew up with her younger brother.

Sylvia has a very supportive and encouraging family. She currently resides in Sydney with her two friends.

Sylvia joined Brisbane State High School for her primary education. Later, she enrolled at the University of Queensland where Sylvia graduated with a Bachelor of Arts in Journalism.

Sylvia Jeffreys began her media career working as a script assistant in the newsroom for Nine Network in Brisbane in August 2005.

In the year 2009, she started documenting lifestyle stories on Queensland's Extra program. Later she moved to the newsroom.

On January 2012, Sylvia moved to Sydney to join as a New South Wales reporter on Australian breakfast television Program Today until June 2013, when she was replaced by Natalia Cooper.

Sylvia married to her longtime boyfriend, Peter Stefanovic on 1 April 2017. Her husband Peter is an Australian Nine Network reporter who is a younger brother of Today host Karl Stefanovic.

They first met each other on the set of Today show and started dating since January 2014. However, they had to be far from each other at that time as Peter was a European-based journalist.

After dating for two years, they finally decided to engage on July 2016 when they were on their European holiday.

The couple even co-hosted the show called Australian breakfast television program, Weekend Today while Leila McKinnon and Cameron Williams were on leave.

There were rumors that Sylvia prohibited Jasmine Yarbrough, Karl Stefanovic’s new girlfriend from joining her marriage as she wanted to prevent the “media circus” on her special day.

The Australian television show Nine Network’s Today presenter, Sylvia earns lots of from her journalist career. However, her current net worth and salary has not disclosed yet.

There was also a rumor that, Sylvia and her husband Peter bought a lavish four-bedroom house around $2.7 million in Sydney.

Sylvia stands at the height of 1.7m/ 5 feet 7 inches. She has a brown hair and black eyes with a beautiful smile.