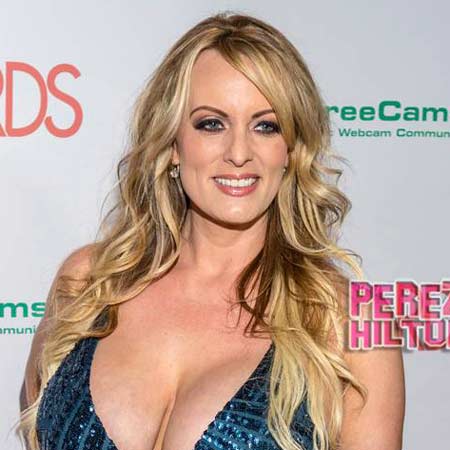 Stormy Daniels is an American adult-movie actress and a striper who has won several awards like NightMoves, XRCO Hall Of Fame and AVN for her contribution in adult movies. Besides, she was also involved in politics and formed an exploratory committee. Daniels grabbed huge popularity after the legal dispute with the current US President Donald Trump and his attorney Michael Cohen. Daniels claimed that she had an affair with him whereas Trump denied the affair and accused her of lying.

Stormy Daniels was born Stephanie A. Gregory Clifford on 17th March 1979 in Baton Rouge, Louisiana under the birth sign Pisces. Daniels is American as per nationality, and as far as her ethnicity is concerned, she is White. She is the daughter of Sheila and Bill Gregory who divorced when she was about 4 years old.

came from an average, lower-income household there [were] days without electricity.

In 1997, Daniels graduated from Scotlandville Magnet High School. When she was young, she wanted to be a journalist, but future had different plans for her.

Stormy Daniels started working as a stripper at the age of 17 at the Gold Club in Baton Rouge and became a feature entertainer with Continental Theatrical Agency. Later, she appeared in several adult movies. In July 2002, she starred in Wicked Pictures' Heat performing her first lesbian scene.

Besides adult movies, some of her films and TV credits include The 40-Year-Old Virgin, Knocked Up, Pineapple Express, and Party Down & Dirt among others.

Stormy Daniels made her political debut in 2009 and formed an exploratory committee. In 2010, a group of Stormy Daniels' fan recruited her to run against Republican Senator David Vitter in Louisiana. The same year she declared herself a Republic candidate. Her main motto was to focus on the economy, business and child protection.

Stormy Daniels has an estimated net worth of $2 million. Her main source of income is her adult-movie career.

As per some online sources, the adult-movie actress averagely earns between $98k -$190k. Daniels has been working in the industry for a long time, so she might earn more than the mentioned amount.

According to Mark Spiegler (an American talent agent for X-rated actresses), here is the earning of the adult movie as per their performances:

While a decade ago the average female performer would make about $100,000 a year.

Adult-movie actress Stormy Daniels has accused president, Donald Trump of having an extramarital affair with him. According to her, the 'couple' started dating in July 2006 after meeting at the American Century celebrity golf tournament, and the two did it in Trump's hotel room.

She also said that Trump even offered her to join him on NBC's The Apprentice. Later, Trump denied the allegation of the encounter.

In an interview with Life & Style (a sister company of In Touch), Daniels spoke about her relationship with Trump for which she was promised a payment of $15k. But before the article was published in 2011, Michael Cohen, Trump's attorney filed a lawsuit, and the story was dropped. As a result, Daniels did not receive the payment.

As of 2018, Wall Street Journal paid $130k to Daniels to publish her affair story with Trump. During the time, In Touch also published the 2011 interview where she said,

You are special. You remind me of my daughter, Ivanka. You're smart, beautiful and a woman to be reckoned with and I like you, I like you.

She also revealed that she was not physically attracted to him.

In 2011, Daniels underwent a lie-detector test for her alleged affair with Trump. As per CNN, she was asked some personal questions during the polygraph test:

For all the above questions, she replied yes. According to the report, there was 99% probability that she was telling the truth.

The 60 minutes interview with Stormy Daniels about her affair with Trump was released in 2018 where she revealed exclusive facts. In the beginning, she told that she was not physically attracted to him. She also stated,

I am not a victim. I am not it was entirely consensual.

After several months, she was threatened by an unknown person. She told,

I was in a parking lot going to a fitness class with my infant daughter. A guy walked up to me and said to me leave Trump alone forget the story. And he leaned around and looked at my daughter and said that's a beautiful little girl would be a shame if something happened to her mom and then he was gone.

She never saw the man again.

Later in the interview, she revealed that the above statement was false.

They made it sound like I had no choice.

She was not physically abused to sign the statement, but she thought that they would make her life hell if she denied signing. She did not know who the actual people were, but she believed it could be Michael Cohen.

Daniel revealed everything just to defend herself. She stated,

It was very important to defend myself. People are just saying whatever to say about me. I was perfectly fine saying nothing at all but I'm not okay with being made out to be a liar or people thinking that I did this for money.

The same year, another statement was also released:

She did not speak about the statement publicly.

Lawsuit Against Trump And His Attorney

On 12th January 2018, The Wall Street Journal reported that Trump's lawyer, Cohen paid Daniel $130k a month before the presidential election to stop her discussing the affair. Later, Cohen confirmed that he paid her from his pocket instead of Trump's property.

It was apparent that Mr. Trump meant to convey that Ms. Clifford is a liar, someone who should not be trusted, that her claims about the threatening encounter are false, and that she was falsely accusing the individual depicted in the sketch of committing a crime, where no crime had been committed.

Mr. Trump made his statement either knowing it was false, had serious doubts about the truth of his statement, or made the statement with reckless disregard for its truth or falsity.

Stormy Daniels has been married thrice. Daniels first married to Pat Myne in 2007. Myne is an American director and a X-rated movie actor who is also known as Danny Case, Pat Lane, and Bart Myne. Two years later, the couple divorced for some undisclosed reasons.

In 2007, Daniels married her second husband, Mike Moz, who also work in the adult-movie industry. In an interview with TheDirty.com, Daniels revealed that Moz helped her to have one of the meetings with Trump.

In 2009, Daniels was arrested by the Tampa Police Department on the charge of battery and domestic violence. As per Cheat Sheet, she "threw a potted plant at Moz, destroyed their wedding album, trashed other property." Later, Daniels told the Tampa Bay Police "that she did not intentionally hit her husband, but acknowledged tossing a potted plant in the kitchen sink, throwing the couple's  wedding album on the floor, and breaking some candles."

Daniels was released on $1k bail. Soon after the incident, the couple separated from one another.

Moreover, in 2010, Daniels tied the knot for the third time to an adult movie actor and a drummer, Glendon Crain. The couple shares a daughter together. In 2015, Crain was arrested in charge of domestic violence against her.

Here is the video where Stormy Daniels revealed some exclusive facts: