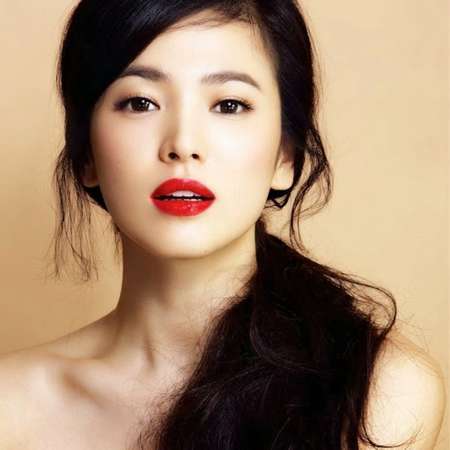 Hye-Kyo is a famous South Korean actor. She rose to prominence throughout Asia after starring in the 2000 drama, "Autumn in My Heart." Some of her famous film credit includes All In, Full House, and Descendants of the Sun.

She started her career as a model at the age of 14. She began her career in the 1996 television drama, "First Love." Hye-Kyo was ranked 7th in the Forbes magazine's Korea Power Celebrity list in 2017. Not only in Korea but her success in the television dramas established her as an international celebrity.

Hye-Kyo was born on November 22, 1981, in Daegu, South Korea. Her nationality is South Korean and is of Asian ethnicity.

She was sick during her birth and her parents and doctor thought that she would not survive. However, she gradually recovered and then her parents registered her birth on February 26, 1982, however, her actual birth date is November 22, 1981.

Hye-Kyo's parents divorced when she was still an infant and she was raised by her single mother. She moved to the Gangnam District, Seoul with her mother where she completed her education.

Hye-Kyo trained as a figure skater while she was in elementary school. She completed her education at the Sejong University of Film Arts. She was dreaming of becoming an actress since from her very early age. She is the followers of the religion Roman Catholic and like with the United Artists Agency.

Hye-Kyo was entitled as a cheerful character by her teacher at the time. After making a wonderful participation within SanKyung Smart Model Contest, she established herself as a wonderful model.

Song Hye-Kyo started pursuing a career in acting after winning the SunKyung Smart Model Contest in 1996 when she was only 14 and was attending a third-year junior high school. She subsequently made her entertainment debut as a model for the school uniform company.

The fame earned Hye-Kyo a small role in her debut television drama, First Love. After this, she continued to appear in several dramas and sitcoms, most notably in Soonpoong Clinic.

Song Hye-Kyo's most promising role came in 2000 when she worked in the KBS drama series Autumn in My Heart. She worked as Yoon/Choi Eun-seo in the series.

The South Korean actress' other widely known roles came in the television dramas like All In (2003), Full House (2004), That Winter, the Wind Blows (2013) and Descendants of the Sun (2016) which achieved pan-Asia success.

She went to San Francisco to study English in early 2005 and returned to Korea in March that year. The same year, Hye-Kyo made her silver screen debut in My Girl and I. Two years after, she was again starred in films such as Hwang Jin Yi in 2007. Her other popular film credit includes The Grandmaster (2013), My Brilliant Life (2014) and The Queens (2015). She is an actress who is active in the film industry from the past 1996.

Shortly after the engagement, the actress announced that the couple was to tie the knot at the end of October 2017. As they said, they married in a private ceremony on October 31, 2017, at Youngbingwan, Hotel Shilla in Seoul. The couple's wedding was attended by their closest family friends including actors Yoo Ah-in, Lee Kwang-soo, and Park Bo-gum.

Before, she was in a few numbers of relationships. In 2003, Song Hye-Kyo started dating an actor Lee-Byung-Hun. They became close when they worked together on a film All In. Subsequently, the couple broke up in 2004, this was the major center of gossips and attraction among the public as such. Hye-Kyo stated, Hun was a perfect boyfriend but she could not continue her relationship anymore.

Hye-Kyo has stated that she learned to maintain the privacy between her personal and professional life. After her relationship with Hun ended, she made the official announcement about her affair with Hyun Bin in June 2009. The couple remained in the relationship for over one and a half year before breaking  up in 2011.

The height of this popular Korean actress is 5 feet 3 inch tall. Song Hye-Kyo has a perfect figure with the measurement 34-24-33 inches (breast-waist-hip). Hye-Kyo weighs 48 kg. She has a naturally beautiful face and amazing body curves. She can handle herself with every kind of dress she puts on. Her favorite brand is Hermes.

According to celebritynetworth.com, the gorgeous South-Korean actress, Song Hye-Kyo's current net worth is estimated to be around $20 million

Song Hye-Kyo lives in a luxurious home in Samseongdong. She bought the lavish house in 2016 for a whopping $9 billion won ($7.5 million) under her mother's name in Seol.

Full House All In Autumn in My Heart