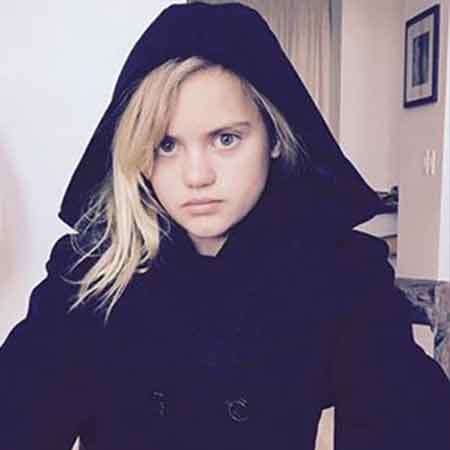 Sixteen Jones is an actress as well as a model who is popular for her roles in Tommy Can't Sleep (2017) and Die Antwoord: Ugly Boy (2014). She is the daughter of South African rapper Watkin Tudor Jones and singer Yolandi Visser. She is also a songwriter for the band, The Boy With the Rainbow Face. Her voice appears on many of parents' tracks so far.

Sixteen Jones was born on January 15, 2006, in South Africa under the birth sign Capricorn. She is the only daughter of Watkin Tudor Jones who is famous as Ninja and Yolandi Visser of Die Antwoord. As far as her ethnicity is concerned, Jones has a mixed ethnical background and is a South African nationality.

Jones also has an adopted brother, Tokkie Jones. Her grandfather is Ben du Toit. From an early age, she was interested in the field of music and also appeared in the music videos for her parent's group.

Sixteen Jones is recognized as one of the kid celebrities. At the age of seven, she made her debut in the media on her parent's music video, I Fink U Freeky. She appeared with the snake around her neck which provided food for the tabloids. This raised many questions on the parenting ability of Visser and Ninja.

Jones also has made various voice appearances in various of her parent's tracks. She has adopted some of the fashion sense from her mother and made the faces like her father which is one of the most impressive parts of Jones.

Sixteen Jones is also the member of the band The Boy With the Rainbow Face along with Sunny who is the daughter of Flea, bassist of the American Band, The Red Hot Chilli Peppers. Sunny is the frontwoman whereas Jones backs her up and also writes songs for the band.

Jones appeared in an issue of Obrigado Magazine and on the cover of Rolling Stone magazine alongside her popular parents.

The actress also made fashion statements with her unique concepts and also took the front row in fashion shows.  In 2017, Jones sat in the front row at the Alexander Wang Spring/Summer show at New York Fashion Week with other #WangSquad members like Kylie Jenner.

Sixteen Jones' Net Worth And Earnings

Her father is the frontman of the rap-rave group Die Antwoord under his stage name Ninja. The group released their debut studio album $O$ in 2009 and had more success with their second album Ten$ion in 2012.

Sixteen Jones is still very young but has taken a lot from her parents. She is following their footstep to be one of the successful and famous personalities in the music industry. Jones is yet to join any major social media websites like Instagram, Twitter, and Facebook.

Jones’s parents are not married though they have been together for years. It’s just that they have never tied the knot.

Yolandi Visser whose real name is Anri du Toit is the mother of the Sixteen Jones. She is a famous singer as well as an actress who has acted in various TV shows and in films including the Neal Blomkamp 2015 movie, Chappie with her boyfriend, Ninja where they performed a meta fictionalized version of themselves. She is the frontwoman of the Die Antwoord band.

Die Antwoord is an African word which means The Answer in English. They formed their group in Cape Town, South Africa in 2008. It is comprised of three members; two vocalists and their producer. The trio is Yolandi Visser (vocalist), Watkin Tudor aka Ninja (rapper) and Dj Hi-Tek aka Justin De Nobrega (producer).

Their music is more out of the norm in the hip-hop genre. They accumulate elements of South African counterculture movement zef's music and visual style. The band has released two EPS, one mix-tape and five studio albums to date.