Are Shia LaBeouf and Mia Goth back together again? It's been nearly two years since the pair filed for divorce and the two have recently cozied up to each other and they both had worn wedding rings.

The estranged husband-wife duo was spotted talking on a bench in Los Angeles on Friday, March 27, according to pictures published by the Daily Mail.

The Emma star, 26, sported a diamond ring and a wedding ring while the Honey Boy actor, 33, was also spotted wearing a wedding band.

At one point, the pair, who looked casual in athleisure, shared a kiss, according to the photos obtained. LeBeouf was previously spotted wearing a wedding ring at the Academy Awards in February 2020. 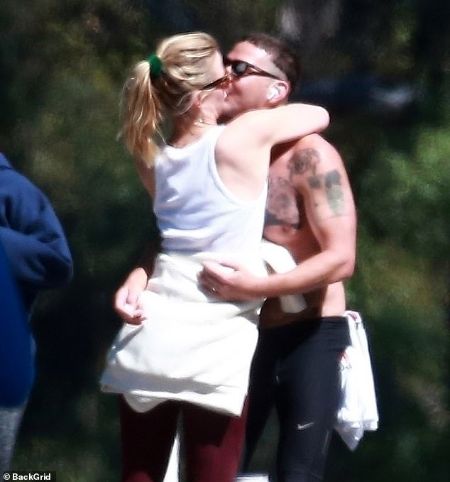 As previously reported, sources confirmed in September 2018 that LaBeouf and Goth had called it quits after nearly two years of marriage.

A representative for LeBeouf told media at the time,

Shia and Mia have filed for divorce. The separation is amicable and all details pertaining to the divorce proceedings will remain private.

The two first met on the set of Nymphomaniac: Vol. II in 2012 and started dating shortly after. They never officially announced that they wear engaged but sources confirmed their engagement after Goth was spotted with a diamond ring at a Paris fashion show in March 2015.

LaBeouf and Goth got married in a lavish ceremony in Las Vegas in October 2016. Following their split in September 2018, LaBeouf reportedly started a relationship with singer-songwriter FKA Twigs but they parted ways after nine months of dating in June 2019.

He was previously also in relationships with actress Carey Mulligan (2010) and stylist Karolyn Pho (2010-2012).