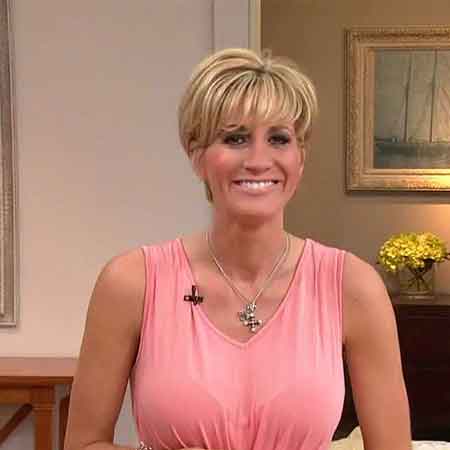 QVC fame TV anchor, Shawn Killinger is a well-known TV personality who is most recognized for her spontaneity and dedication towards work. She started her career as a set a s sistant for CBS Evening News then worked for Late Show with David Letterman and CBS 60 Minutes. Since 2007, Killinger is entertaining millions of viewers as QVC host, boosting sales of the company. She is described herself as a warrior shopper and hope spreader on her QVC profile page. Prior to her popularity on The Apprentice: Martha Stewart and QVC, she worked as a set a s sistant for a number of well-known networks like CBS Evening News and Late Show with David Letterman.

Shawn Killinger was born on November 2, 1979, in Detroit, Michigan. At the age of 11, she moved to Mexico City along with her family and lived there for four years.

She attended the International American School Foundation and later,  graduated from Penn State University in State College with a degree in Marketing.

Killinger worked with the International Labor Organization (ILO) and the World Health Organization (WHO) while doing her matriculation for college. She is fluent in Spanish.

Shawn Killinger moved to New York City in 1997 soon after completing her graduation. At first, she worked for CBS Page Program as a set a s sistant where she provides scripts for Dan Rather for the CBS Evening News and later helped seating audience members at the David Letterman show,  Late Show with David Letterman. Then she became the Assistant Producer for  CBS News ‘Foreign Desk’ program.

After working for nearly two years behind the scene, Killinger eventually decided to come in front of the camera and served as an anchor-reporter for Fox and CBS stations. She was a newscaster in local and network news for 10 years, and then she hosts a show for an affiliate in Orlando, Florida.

Shawn Killinger was a cast member on Martha Stewart’s version of ‘Apprentice’ where she gets fired because the host did not like her catchphrase "Fake it till you make it" but eventually it became a rage in popular culture. Later, she joined Martha Stewart in promoting her QVC apparel line. In 2007, Killinger joined QVC as a program host and since then she is entertaining millions of viewers.

Shawn Killinger is a popular TV personality who rose to fame as a QVC host. She has an estimated net worth of $1 million. The average salary of QVC TV hosts is between $79k-115k, so, she might earn the same figures.

Shawn Killinger married consultant Joe Caretta at an intimate ceremony. The couple first met via dating sites and eventually fell in love. In 2014, when she suddenly disappeared from her shows, different rumors started swirling, later she came out with a heartfelt Facebook post where she stated she has an unfortunate miscarriage while five months pregnant with a daughter.

Later, in June 2017, the pair adopted a baby girl, Jagger Jude. She also has two stepsons from her husband's first marriage. Currently, the family of three reside in Philadelphia. She often posts her family pictures on Instagram where she has more than 86k+followers as of August 2019.

In 2008, Killinger was involved with Make-A-Wish Foundation where she served as Wish Grantor’, fulfilling the wishes of children with life-threatening illnesses and she considers it one of the most important things in her life.

In 2015, Killinger and designer Isaac Mizrahi were trolled on the internet after they argued on whether the Moon is a planet or a star during the show. Later, they got off-camera information that the Moon is a natural satellite.

After a year of controversy, a petition was filed on the consumer advocacy website ‘Pissed Consumer’ requesting the removal of ‘egomaniacal’ 'Shawnie Sue' persona as the host of the show. The petition was viewed more than 24k times with two hundred comments though everyone wasn't agreed with the original poster.

Once there was some rumor regarding her of having cancer however she has not revealed such health issues. Bt some f the source has revealed that her father was diagnosed with cancer and later on overcome it after some chemotherapy.

Below we present the video of Shawn Killinger,