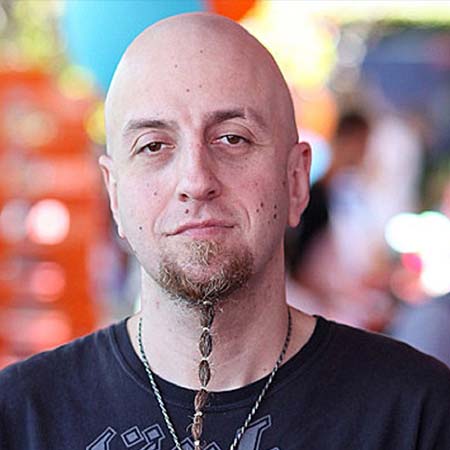 Shavarsh “Shavo” Odadjian is an American songwriter, multi-instrumentalist, music video director, editor, and music producer. The multi-talented vocalist is best known as the ba s sist, occasional songwriter of the Grammy Award-winning metal band System of a Down.

Shavo Odadjian was born on April 22, 1974, in Yerevan, Armenia under the birth sign, Taurus. He holds an American nationality and belongs to a white ethnic group.

Odadjian was raised by his grandmother along with his brother Dave Odadjian in Los Angeles.

Regarding his education, he attended an Armenian parochial school, Alex Pilibos Elementary School, in Los Angeles.

While attending college, Odadjian started his career after joining the band Soil as the manager in 1993, where Daron Malakian, and Serj Tankian, were already the members. He became the band's ba s sist, and renamed the band System of a Down, after a poem written by Daron, in 1994.

In addition, he also wrote songs for the band which includes ‘Toxicity’, ‘Sugar, ‘Jet Pilot, ‘Bounce,’ ‘Mind,’ ‘Dreaming,’ and ‘U-Fig.’ He has also directed the majority of the band's music videos.

Moreover, he catches the eye for his notoriously scaling, braided beard, and spiked arm bracelet. Particularly his beard quickly became a part of his signature look.

According to Celebrity Net Worth, Shavo has an estimated net worth of around $16 million as of June 2019. The main source of Shavo's income is his career as a musician, songwriter, multi-instrumentalist, music video director, and painter.

His net worth is comparable to other media personalities like Aaron Paul and Jenna Elfman ($16 million).

Odadjian is happily married to Sonia Odadjian. The couple exchanged their wedding vows in 2009, however, he has not revealed much information about his conjugal life to the media.

CAPTION: Shavo Odadjian is an American songwriter, multi-instrumentalist, music video director and editor, and music producer. SOURCE: We Heart It

He and his wife Sonia are blessed with a child, Hayk Odadjian.