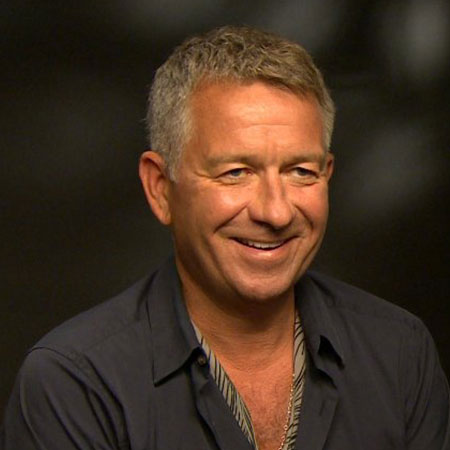 Sean Pertwee is an English actor as well as a voice actor, known for portraying Alfred Pennyworth in an American crime drama television series, Gotham along with Camren Bicondova, Ben Mckenzie, and Donal Logue among others. Pertwee played as Captain Fitzpatrick in Tom Jones, Pilot Smith in Event Horizon, & Sergent Wells in Dog Soldiers. He is also the narrator of Master Chef: The Professionals.

Pertwee married a makeup artist, Jacqui Hamilton-Smith and they together had twin children, Alfred and Gilbert. However, Gilbert died four days later because of premature birth.

Pertwee was born to Jon Pertwee, an English actor, and Ingeborg Rhoesa. She has a sister, Dariel Pertween who is an actress.

Pertween had an interest in acting since his early childhood. He started working soon after completing his education at the Teddington School in London.

During the time, Pertwee was just eleven when he got first chance to play in a television series, Billy Smart’s Children Circus.

After his first onscreen debut, Sean Pertwee took a brief break from acting and began developing skills of acting. Later, after a couple of years, he showed up in the television series, Worzel Gummidge and played as one of the scarecrows.

Pertwee later appeared in various television series as well as movies. Besides, he also appeared in theatre play & several video games including, Worzel Gummidge(1981), Poirot; The King of Clubs(1989), The Chief(1991), The Ruth Rendell Mysteries(1992), The Gene Machine (1996), Gladiator: Sword of Vengeance(2003) and few others.

Pertwee was widely recognized after appearing in TV series, Elementary, and Gotham. Since 2014, he has been working for the series, Gotham.

Sean Pertwee's net worth is estimated to be around $5 million at present. He makes a decent amount of money from his successful professions. He mostly earns a huge money from his acting career.

He has also appeared in the television series such as Poirot: The King of Clubs, Chancer, Chancer, Boon, The Ruth Rendell Mysteries, Cadfael, Peak Practice, Waking The Dead, Julius Caesar, Law & Order: UK, Elementary, and The Musketeers.

Sean Pertwee is married to a make-up artist, Jacqui Hamilton-Smith who is a daughter of Anthony Hamilton-Smith, a peer, dentist, and politician. They tied the knot on 12 June 1999 in the House of Lords.

His wife Jacqui gave birth to twins, Gilbert & Alfred, around Christmas of 2001. However, his son Gilbert expired four days later because of premature birth.

The couple has been in the relationship for approximately eighteen years, and till the date, there is no rumor about their involvement in any other affairs. The duo gives equal time to their career as well as to their family.