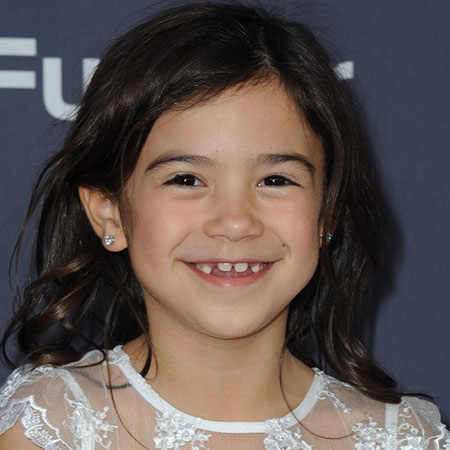 Young and beautiful, Scarlett Estevez is a popular child actress who has appeared in several movies and TV commercials in her career. She made her commercial debut at the age of 3. She has appeared in more than 25 commercials including Apple, Cheerios, and Little Tikes. Her first movie appearance was in a short film for the "Make-A-Film Foundation" called The Magic Bracelet. She played a supporting lead character in the films Daddy's Home (2015) and Daddy's Home 2 (2017). She appeared in two television series, The Massively Mixed-Up Middle School Mystery, and If You Give A Mouse A Cookie in 2015. She received the biggest role in the same year in the movie Daddy’s Home. Estevez played the role of a little girl named Megan who lived with her mother and step-father.

She was born on December 4, 2007, and was raised in Los Angeles CA. The information about her parents and family is not clear. She has a younger brother.

Her first movie role was in a short film called The Magic Bracelet for the Make-A-Film Foundation where she played the role of a young Ashley. She was cast alongside Hailee Steinfeld and James Van Der Beek, among others in a Short Film.

Scarlett Estevez then went on to shoot for her first feature film And There Was You starring Garcelle Beauvais. She can also be seen as a series regular on Fox's Lucifer (2015). The show is in its third season.

Later, she co-starred in the pilot Redeeming Dave which was written by Dominic Russo, and also co-starred on the Nickelodeon Web Series Junior Eye. Scarlett got her first big break when was cast in a supporting lead in the movie Daddy’s Home. She played the daughter of Linda Cardellini and Mark Wahlberg and step-daughter of Will Ferrell.

Scarlett Estevez's Net Worth And Salary

Scarlett Estevez's net worth can be close to millions at present. She earns a decent amount of money from her career. The teen actress at such a tender age has played a number of breakout roles in both movies and TV series.

She has appeared in the movies such as Someone to Love, The Magic Bracelet, Daddy's Home, The Massively Mixed-Up Middle School Mystery, and Daddy's Home 2.

Currently, Scarlett Estevez is working on the FOX television drama Lucifer as Trixie. It is simply amazing that even at this very young age, she is a brilliant actress and there is a lot of hope for her to be a very successful start in the future.

Scarlett Estevez is very cute, adorable, and charming and people cannot resist loving her. She looks very sweet, innocent, and beautiful at the same time. She has a height of about 3 feet 5 inches and her weight is approximately 20kg.

She is the niece of Liza Weil, an American actress. Liza Weil is best known for her role as Paris Geller in the WB/CW series Gilmore Girls.

Liza Weil was married to actor Paul Adelstein from 2006-2017. The couple married in a Reform Jewish ceremony in November 2006. They have one child, a daughter named Josephine Adelstein born on April 20, 2010.

Weil filed for divorce from Adelstein in March 2016, citing irreconcilable differences. The divorce was finalized in November 2017.